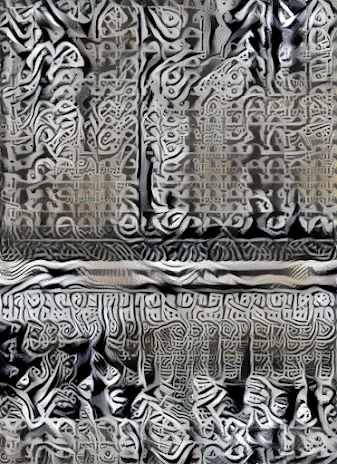 Is experimental poetry accessible? After an image I posted of a strange Japanese letter experiment on Twitter went mini-Viral, a friend asked how they could access its alt-text, an accessibility tool for the vision-impaired. Twitter only began allowing alt-text additions to posts during the pandemic, but it is still only rarely used. In the end, I just described the image to that friend, realizing, of course, the wider insufficiency. As I post a lot of artwork, conceptual poetry, and avant-garde crossovers, I started thinking about alt-texts as the distillation of a concept of a work that are themselves often distillations of ideas of other works. I began composing alt-texts for all of my tweets.

My twitter stream is not about personal events or opinions, but as I worked backwards through the past year, I realized that I was, in fact, creating a map of my thinking, yearning, diverting, and learning through the 2020 (Twe’Twe) pandemic. The alt-text as poem, while highlighting the problem of access (especially in a quarantine), work backward through my compendium of mental supplements in a time of global emergency.

cover image by the author: “The Layers of Descent”

Gregory Betts is a poet, professor, editor, and musician at Brock University. His most recent books include Foundry (Redfoxpress (Ireland), 2021), a collection of visual poems, and Sweet Forme (Apothecary Archive (Australia), 2020), a visualization of the sound patterns in Shakespeare’s sonnets. He is the curator of the bpNichol.ca Digital Archive and President of the Association of Canadian College and University Teachers of English. He lives in St. Catharines, Ontario.