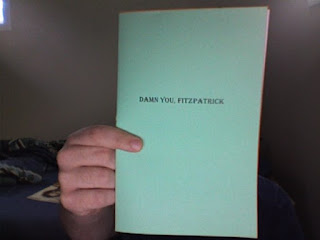 I’m not going to lie to you. This chapbook is more than the ephemeral wank that it appears to be. Coming out of a pseudo-disgust for a friend who ditched them in favour of a more glamorous urban setting, the idea that someone might choose Montréal over Ottawa is a palpable irritation felt through these five poems. DAMN YOU, FITZPATRICK slams the impersonal, nomadic impulse that comes with much travel. These five writers explore the notion that travel should be less about places (and the perception of places) than about the people you meet there.
“Fitzpatrick” is a figure that haunts the five poems in this collection, acting as a connection point for these five diverse writers. All five poems share an elegiac tone, even if employed jokingly. The writing here evokes a sense of death; even as Christine McNair opens her poem by evoking a resurrection (“You’ve come back from the dead”), she turns the resurrected figure into a war machine. The poem has an apocalyptic air, creating an account of what Jean Baudrillard calls “the gray imminence”:
"First follow people you meet in the street, at random, for an hour, two
hours, brief sequences, disorganized – with the idea that people’s lives are
arbitrary trajectories, directionless, going nowhere, and that for this very
reason they are fascinating. The network of the other is used as a means of
absenting yourself from yourself. You exist only in the other’s trace, but
without his knowledge; in fact you follow your own trace almost without
knowing it yourself." (Fatal Strategies, p. 161)
Like the scene in McNair’s poem, the gray immanence is an act of erasing the other and in that act leaving a trail of yourself simultaneously reading and eliminating the other. McNair’s poem is in a double bind here as it both evokes the erasing force of the subject (the war machine of the poem) even as she erases that subject with her own subjectivity, thereby spectralizing the same figure she resurrects through language at the beginning of her poem – McNair’s poem acts as a war machine across “Fitzpatrick” leaving his “real” trip through Ottawa as unreadable outside of these poems, which make up a kind of “official account” of his trip.
The rest of the writers in this collection follow “Fitzpatrick,” erasing and writing over him palimpsestically. Amanda Earl transposes a foggy stupor over what “Fitzpatrick” might mean (“but i’m not exactly sure what the prairies are,” “these creatures known as calgaRYiANs / are they all named ryan?”) at the same time as suggesting that to “Fitzpatrick” all eastern cities look alike (“getting so drunk / in sturgeon falls / they think ottawa / is montreal”). East and West are both confused here with regard to the other as each overwrites what the other represents. Even as Max Middle’s short poem (“damn you fitzpatrick / you said we would meet”) wishes for a meeting – between “Middle” and “Fitzpatrick,” between Ottawa and Calgary, between East and West – these two sides seem cursed to moving through one another spectrally.
And while rob mclennan’s poem aims to evoke connections despite distance – it’s important to notice the “strand of hair” mclennan references as a type of haunting even as the ghost of the other moves further from view as you approach it, like a baseball in space – there is some hope left in this narrative of perceptions and misconceptions. The last of the five poems, Pearl Pirie’s poem finds similarity in difference. Pirie’s poem is an attempt to understand what makes Calgary tick, even if only on the level of the food you might eat at 4:00 am. Pirie acknowledges that though we run the risk when travelling of imposing our narratives on the other, we can sometimes find comfort in our differences, falling “thru a portal / to tall tables, huge milk glasses / home mom pigeons coo,” and reappearing comfortably in the narratives of others as a bit player able to participate without erasing and rewriting them.
DAMN YOU, FITZPATRICK (2008)
free to above/ground press subscribers
anyone else, query rob at az421@freenet.carleton.ca for a copy;
Posted by rob mclennan at 1:17 PM No comments: