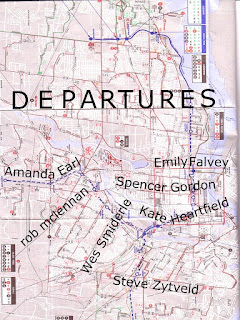 Departures comes out of a monthly fiction writer's workshop in Ottawa started in 2006 by Tina-Frances Trineer, with its first meeting December 6, 2006 at Cuppedia on Main Street, with early participants Tina, rob mclennan, Amanda Earl, Kate Heartfield and Josh Massey. Other members Emily Falvey, Steve Zytveld and Wes Smiderle were added in April, 2007, around the time Tina moved to Wakefield. Spencer Gordon joined in September, 2007.
Amanda Earl's sexually explicit fiction appears in anthologies by Cleis Press, Alyson Books, Thunder's Mouth Press, Carroll and Graf and in local magazines, The Puritan and Front & Centre. On line you can find her recent smut at Thaneros.com, Lucrezia Magazine (lucreziamagazine.com) and Lies With Occasional Truth (lwot.net). Her stories and musings on sex & sexuality can also be found at amanderotica.blogspot.com.
Emily Falvey is a writer, curator, and art critic currently living in Ottawa. Her fiction recently appeared in decalogue 2: ten Ottawa fiction writers (Chaudiere Books, 2007), and her essays and art criticism have been published by galleries and museums across Canada.

Spencer Gordon was born in 1984 in Thompson, Manitoba. Although he currently resides in Ottawa, Ontario, he will be attending the University of Toronto in the fall of 2008, taking an MA in English in the Field of Creative Writing. Recently, his fiction has appeared in zaum (previously Mandala). He is the co-editor and co-founder of The Puritan: Ottawa's Literary Prose Journal. Find his interviews with authors such as Robert Kroetsch and Guy Vanderhaeghe online at puritan-magazine.com. He can be reached at spencerkjgordon@gmail.com.

Kate Heartfield rode the OC Transpo beast for 11 years, before giving in and buying a car and a house in the country last year. When she isn't writing fiction, she writes editorials and columns for the Ottawa Citizen. Last year, she was a student in the Humber School for Writers correspondence program, where her mentor was Paul Quarrington.

rob mclennan recently returned to Ottawa after his tenure of writer-in-residence at the University of Alberta. The author of over a dozen titles of poetry, fiction and non-fiction, his most recent titles are the novella white (The Mercury Press), the travel book Ottawa: The Unknown City (Arsenal Pulp Press) and subverting the lyric: essays (ECW Press). A writer, editor, publisher and organizer of the small press action network - ottawa (span-o), he regularly posts reviews, essays, interviews and other notices at robmclennan.blogspot.com

Wes Smiderle is an Ottawa writer. He’s napped on buses, slept around on trains, snoozed at sea and drifted off at the wheel but he’s never been able to fall asleep on an airplane.

Steve Zytveld was born in Kamloops, BC, but has spent most of his life in Ottawa, where he currently lives with his wife Catherine in a cramped downtown apartment with their guinea pigs and thousands of books. He has been a writer of prose and verse, a peace activist, a labour activist, a performance artist, a Parliament Hill reporter, an editor, a publisher, a poster artist, an actor, and a scholar of mediaeval literature. He learned to ride a horse before he learned to drive a car. Nowadays he hosts the Dusty Owl Reading Series when he isn’t working on any of a number of writing projects, including a novel, The Passing of Arthur King, and a nonfiction work tentatively titled No Simple Highway: A History of The Prescott Highway. His work has appeared in a number of publications, including this one.
$6 / +$2 for postage/shipping
above/ground press subscribers rec' a complimentary copy;
mail all your money to:
rob mclennan, c/o 858 Somerset Street West, main floor, Ottawa Ontario Canada K1R 6R7 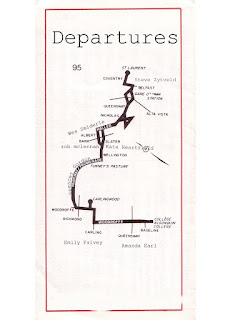 Posted by rob mclennan at 11:24 AM No comments: