new from above/ground press: Visions of Bolaño, by Wade Bell 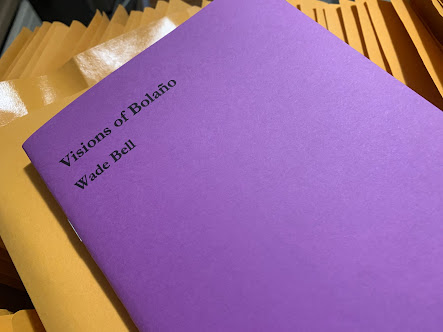 It probably was not him.
On the slow, local train returning to my Catalan village after a weekend in Barcelona I take a moment from reading Henry Miller and jotting down observations in my journal to glance across the aisle and a row ahead where a man frantically writes in a large red notebook.
I wonder what he’s writing. Something powered by intense emotion, I would guess from the speed with which he wields his pen.
It is spring, wet, the countryside green. The train’s windows are opaque sheets of emerald rainwater.
He senses me staring and glances over. He is gaunt, in his forties. His sculpted features are ragged, more Giacometti than Leonardo. Behind wire rim glasses are eyes of a fanatic, or addict.
After the seaside town of Arenys de Mar, the sun appears. To catch its warmth, I take my sandwich from my packsack and scrunch against the window.
In front of village houses potted geraniums gleam red or white. Mimosa bushes sport the identical green and gold of the University of Alberta Golden Bears basketball team uniforms. Almond trees are robed in bridal white.

Wade Bell: Born in 1941 in Stettler, Alberta, and at the age of one week was moved by my mother to an Edmonton tenement where we lived in  wartime food rationed poverty. Joining the RCAF my father had left her pregnant. I went to Carleton University, wrote my first book in Ottawa and stayed in the city to work for the CRTC.
Following a devastating marriage breakup, I quit the safe government job and went travelling.
Back in Ottawa in need of money I drove taxi, the lone Anglo in a French crew stationed at the bus depot. I saved some money and I left to travel again.
Through a series of fortuitous connection made in Ireland I was invited to spend three months in Spain. I went and stayed five years.
Many of the stories in my three subsequent books are set in Barcelona or the Catalan countryside.
With a Spanish bride and needing money I came back to Alberta to work in the oilfields, mostly in the wilds of the boreal forest.
I am now 81 and living in Calgary. In addition to my four books, I have published over 50 stories and poems in literary magazines, anthologies and text books in Canada, the US, Japan, Denmark and Italy.