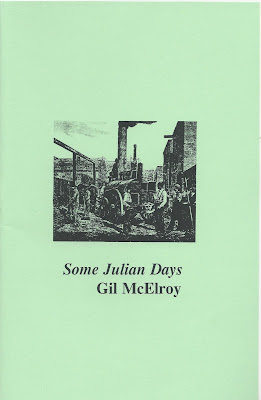 Some Julian Days : Twentieth Anniversary Edition
Gil McElroy
with a new afterword by the author
$5

So we reach a level
of particularity, & such acts of
motion as are prior to hindsights
are, on their own,
largely erased.  We face
the inevitable need
for rooms & the stuff
of homes.

One
religion is needed, one
avenue & form of literature - happy
English words, useful
in the distant study
of the dead.

I lack
all the right words
for instincts. Have we
completely acceptable senses?
Or is the formation
of successive days but one tiny occasion
of senses newly dead?

Understand,
such a place in myself
is built
with appropriate names.

Some Julian Days was originally produced by above/ground press in an edition of 300 copies, March 1999.

Gil McElroy is a poet, visual artist, curator, and visual arts critic. He has published four books of poetry with Talonbooks, a collection of art writing with Gaspereau Press, and a memoir about his father and what it was like growing up a military brat during the height of the Cold War that was also published by Talonbooks. His visual art has been exhibited in galleries across Canada, and he has curated exhibitions for numerous art galleries.

He’s also published numerous chapbooks, and in 2013, was co-winner of the bpNichol Chapbook Award for The Merton Lake Propers published by Baseline Press in London, Ontario.

He currently lives in Colborne.