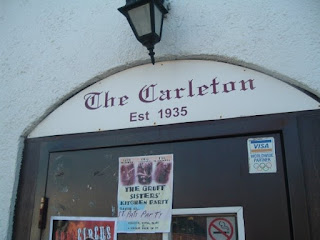 From Metonymies: Poems by Objects Owned by Illustrious People
Stephen Harper’s Shoes
Long days holding up the country,
short nights breathing fresh air.
Each morning, a minion polishes away
a day’s accumulated scuffs
with matt black petroleum paste.
My burnished upper reflects the blurred image
of the face above but does not shine.
My heel grinds even the iridescent
beetle, silent, powerless, beautiful,
Into the Langevin asphalt. My steel
shank would never pass security
if the face did not control it personally.
The feet have no particular smell,
like winter air or snow. I complain
of the unguents, salves and balms, reeking of sulphur
that, despite all evidence to the contrary, will not
relieve the cracked and callused heels.

published in Ottawa in an edition of 200 copies, and launched as part of the above/ground press 17th anniversary reading/party, September 3rd, at the Carleton Tavern;
to order, send cheques (add $1 for postage; outside Canada, add $2 US) to rob mclennan, 858 Somerset Street West, main floor, Ottawa Ontario Canada K1R 6R7
Stephen Brockwell's most recent book is The Real Made Up (Toronto: ECW Press, 2007). The first installment of his Impossible Books project was delivered at the Olive Reading Series in December 2007. Brockwell is trying to find a way to run a small IT company and write poems without going completely mad. Stephen recently moved to the charming Ottawa neighbourhood of Lindenlea just north of Beechwood Avenue.
Posted by rob mclennan at 6:08 PM No comments: