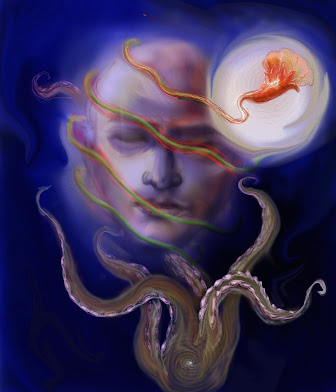 soft music. we go inside the OceanCruiser. The OceanDweller walks among the white Poplars. We can hear the rustling of leaves. while walking on the dried leaves he speaks of the genesis of Song

some reprieve. the voice changes its timbre

Asuriq was the first flower on this planet; its pollen carried by the comet Indra to the depths of this planet’s oceans. Long roots and small leaves. Volcanic cycles made the flower surface 130 million years ago. Humanity had not yet come to earth.. It was the time of birds, alone with flowers on the surface. it was then that songs began to take form. the first song was a dialogue between the birds and Asuriq.

the room. The television speaks in Farsi. No sound of birds.
the poem is recited with soft music in the background.

further of his translations of Marvi's work appeared recently at periodicities: a journal of poetry and poetics

Saeed Tavanaee Marvi is a poet and translator born in the city of Mashhad in 1983. His books include The Woman With Chlorophyllic eyes, Verses of Death: An Anthology of American Poetry and a translation of Richard Brautigan’s Tokyo Montana Express.

Khashayar Mohammadi is a queer, Iranian born, Toronto-based Poet, Writer, Translator and Photographer. He is the author of poetry chapbooks Moe’s Skin by ZED press 2018, Dear Kestrel by knife | fork | book 2019 and Solitude is an Acrobatic Act by above/ground press 2020. His debut poetry collection Me, You, Then Snow is forthcoming with Gordon Hill Press in Spring 2021

This is Mohammadi’s second chapbook with above/ground press, after Solitude is an Acrobatic Act (2020).