new from above/ground press: Sessions from the DreamHouse Aria, by Amanda Earl 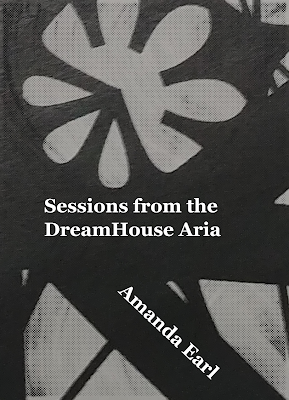 A loved the Catalyst but I became bored. Did I love him? We worked together. Was she bored? We grew up together. He didn’t grow up. I was stagnant. At the office, there was a woman. Younger than her. We laughed. I admired her fairy hair. She likened her to a sprite. It was then I woke up. Did she wake? Was I flirting? At home, she was depressed, confused, felt trapped. I slept around. men/women/women/ and one beauty who defied gender. The Catalyst insisted on couples’ therapy. Was there therapy?

The therapist’s office, was it an office? In her home. A walk from my own. Those August afternoons in the heat. Plants had entered their yellow phase. Everything was yellow. Gold. she was tarnished. Dandelion, I was invisible, wispy, ready to sail.

I used to wander. Did she wander as a child? We lived in the country for a while. In the red brick house with a half acre. Was it a half acre? I ran away. She packed a small case with dolls and toys. I hid behind the wall, near the wrought iron gate and the tiger lilies. Did she hide?

She ran in the wind, swirling and twirling. How I loved to run. In the apartment where we moved, she loathed the city unless I could get out to the creek, hide away from him. The Old Catalyst took her for rides in the car alone on weekdays when he lost his job. We went to Centre Island. His hand on her thigh, moving upwards. I moved out as soon as I could. 19. The man she met was kind, we were young. I was numb. A fairy tale princess sleeping through life. Did I sleep?

I wrote a letter to the Sprite. Confessing her … did I confess my love? The correspondence was corny as fuck. Sentimental. I wrote poetry, drew illustrations of flowers and fairies. The Sprite e-mailed me. No.

The Catalyst was hurt. He said she had betrayed him. By my confession of love for someone else? Was she in love? By the secrets. Of my childhood. She lay in bed, heavy as a stone. I wanted only to sleep.

Her latest chapbook is En Fer, A Long Poem About A Love Affair (Ghost City Press, 2020)

Amanda is the managing editor of Bywords.ca and the fallen angel of AngelHousePress. She is the recipient of the 2017 Tree Reading Series Chapbook Award for Electric Garden. She was inducted into the VERSeOttawa Hall of Honour in 2014. Two of her manuscripts were shortlisted for the Robert Kroetsch Innovative Poetry Award. Further information is available at AmandaEarl.com. Connect with Amanda on Twitter @KikiFolle.