new from above/ground press: Would You Like a Little Gramma On Those? by Jane Eaton Hamilton 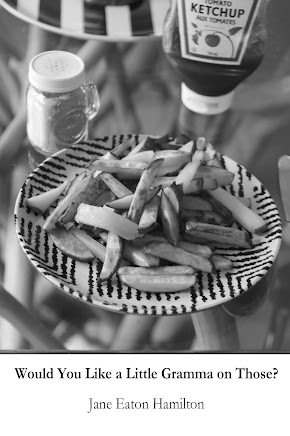 Would You Like a Little Gramma On Those?
Jane Eaton Hamilton
$5

Carol’s sister Marjory had dangled a pendulum over Florida until it came to rest over Gainesville, the center of the state, so she’d moved there from south Florida.

A jetlagged Carol thought of something. “Isn’t this where Ted Bundy had his farewell murder spree?”

Simone, Carol’s butch partner, said, “Not to mention those chain gangs we saw coming in.”

“You go off like a firecracker in all our faces,” said Carol’s brother, Lincoln, to Carol, pushing back his chair.

Lincoln and Carol lived in western Canada, while Marjory and their mother lived in Florida. It had long been the case after fracturing away from their childhood home in Ontario. Lincoln was oldest, Carol middle, Marjory the baby. Lincoln had beat Carol and her family to Florida by days. The last time Carol had seen him, he’d been paunchy with middle age. Now he looked both older and younger than he had, rake skinny with his goatee gone half grey. “Why on earth say that? Why bring that up now?”

“Is that true?” Lizbeth, Carol and Simone’s older daughter, asked. “I saw a TV program on him. He was just some ordinary guy.”

“Shut-up,” Marjory said in a reedy voice, hands fluttering around her ears. Her streaked hair was oily; she had stress-bruises under each brown eye. “Why would you bring that up? I haven’t seen my sister or nieces in years, and our mother is gone and you’re talking about a serial--" She widened her eyes pointedly to show she didn’t want to say the final word in front of her son.

Jane Eaton Hamilton is the author of 9 books of cnf, memoir, fiction and poetry, including the 2016 novel WEEKEND, and two prior collections of short fiction.

Their memoir NO MORE HURT was one of the UK Guardian’s Best Books of the Year and a Sunday Times bestseller. They are the two-time winner of Canada's CBC Literary Award for fiction (2003/2014). They have had a Notable in BASS and three in BAE (2016/2018/2019) and have appeared in The Journey Prize, Best Canadian Short Stories and Best Canadian Poetry. Their work has also appeared in publications such as Salon, The Rumpus, The Missouri Review, the NY Times, Gay Magazine, The Sun and BAX 2020. Roxane Gay chose “The Pleasure Scale” as one of Gay Magazine’s Best of 2019 and Queen Mob's Teahouse cited "The Nothing Between Your Legs," a BAE Notable, as one of the best essays of the decade. Their story “The Pride” won 2nd prize in Writer’s Digest short story contest 2020. They won the Event non-fiction contest in 2020 with their essay, “The Dead Green Man.”