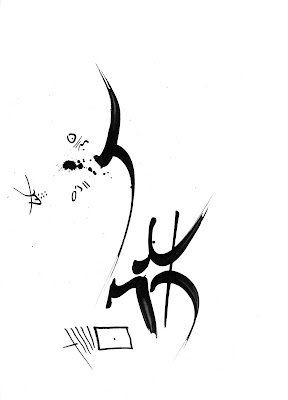 The Haulers of the Horizon

Hawad is a visual artist and poet originally from the Aïr region in the central Sahara. He composes his work in his native Tuareg tongue of Tamazight, in Tifinagh script, which is then co-translated into French with his wife, Tuareg scholar Hélène Claudot-Hawad. Hawad’s work is unique for its deployment of what he has coined “Furigraphy” (a therapeutic poetics involving the frenetic repetition of words, gestures, sounds, and images to evoke a vertiginous and obsessional rhythmic trance), a means by which he achieves “Surnomadism” (a nod to both Surrealism and the nomadic heritage of the Tuareg people). Surnomadism, according to Hawad, is a literary transcendence of the self to encompass ubiquity and escape the superficial physical and mental constraints of time and space, to investigate the breach between the inner and outer self, the self and others, and the past, present, and future. Common themes of his poetry include anti-colonial resistance, Anarchism, exile, nomadism, and the prolongation of Tuareg heritage. Hawad is the author of multiple books of poetry, including Furigraphie: Poésies 1985 – 2015, from which the poems in this book are taken.

Jake Syersak is the author of Mantic Compost (Trembling Pillow Press, 2020) and Yield Architecture (Burnside Review Press, 2018). Two of his full-length translations of Mohammed Khaïr-Eddine’s work are forthcoming in the coming year: the poetry collection Proximal Morocco— and the hybrid novel Agadir, co-translated with Pierre Joris. He edits Cloud Rodeo, an online poetry journal, and co-edits the micro-press Radioactive Cloud.

This is Syersak’s second above/ground press chapbook, after These Ghosts / This Compost : An Aubadeclogue (2017).