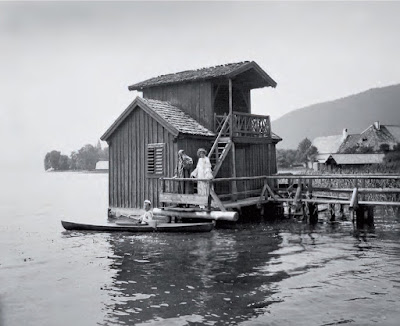 in the 1945 fire at Schloss Immendorf, so also now

known only in black and white, and thus the burden of apples

that must have weighed entire skies

have become just as many blind spots,

small exits, erasures out of which we also slip, wondering

about the green beneath, also erased, which seems

nonetheless particularly rich. That light and thus the houses

making the small town seem to go on rising

Cole Swensen (coleswensen.com) is the author of 17 books of poetry, most recently On Walking On (2017), and a volume of critical essays, Noise That Stays Noise (2011). Her work has won the Iowa Poetry Prize, the SF State Poetry Center Book Award, and the National Poetry Series and has been a finalist twice for the LA Times Book Award and once for the National Book Award. A former Guggenheim Fellow, she’s also the translator of over 20 volumes of poetry, prose, and art criticism from French, and has won a PEN USA Award in Literary Translation. She edits the small press La Presse (lapressepoetry.com).