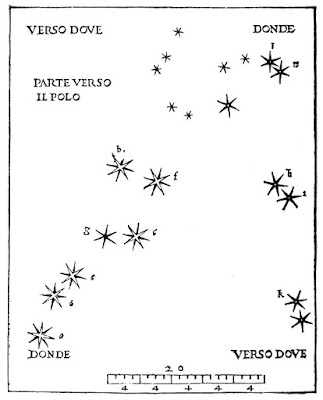 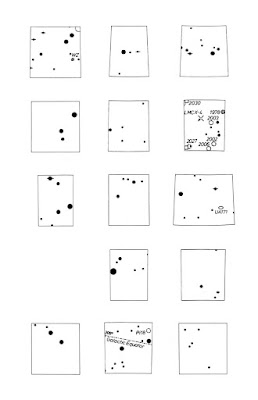 Coronagraphic is a suite of visual sonnets made from images copied out of the Uranometria 2000.0 star atlas. To select these images, ten interlocking sets of fourteen celestial coordinates were randomly generated by a computer. Star charts were scanned and the grid spaces containing each coordinate isolated. Poems have been arranged in loose grids from the resultant images, forming composite views of the night sky. Lines of sight therefore substitute for lines of text in each sonnet.

Stars are charted as they appear from Earth, which means our maps are essentially anthropocentric. That said, viewing every patch of sky included in a single poem is impossible from any one place on Earth. These poems are not tailored to or reflective of an individual’s experience. Instead, they attempt to pay homage to our place in the cosmos as a species. Visual poetry is a way to approach the ineffable, to capture a little of something words cannot manage on their own, and star-gazing is one of those most human of activities for which language, in my experience, is insufficient.

Kyle Flemmer founded The Blasted Tree Publishing Company in 2014 as a creative outlet and community for emerging Canadian artists. He is currently the Managing Editor of filling Station magazine, where he served as Associate Poetry Editor for two years. Kyle graduated from Concordia University with a double-major in 2016, and has released several other recent poetry chapbooks, including ASTRAL PROJECTION (2017) from above/ground press, and Lunar Flag Assembly Kit (2017) from no press.

This is Flemmer’s second chapbook with above/ground press, after ASTRAL PROJECTION (2017).