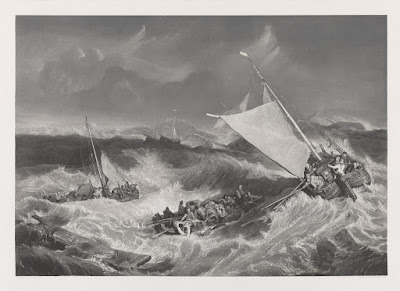 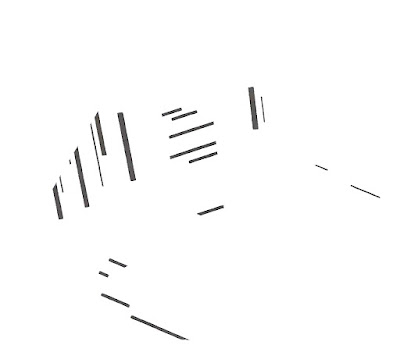 “Tattered Sails” is a visual interpretation of Marcel Broodthaers’s response to Stephane Mallarme’s “Un coup de Dés jamais n'abolira le Hasard.” In 1969, Broodthaers published an edition in which he replaced all of the text in Mallarme’s poem with black bars the size and shape of the original’s writing. The resultant text highlights the radical layout of Mallarme’s poem, with reading across 2-page spreads, shifting type sizes and a shifting reading diction. Broodthaers’ version of “Un coup de Dés” elevates layout and structure to the level of writing itself; content becomes secondary to decisions of the tactile treatment of text.

With “Tattered Sails”, I have continued the tactile treatment of this poem by folding the double-sized pages of Broodthaers’ poem (suggesting the hang and fold of sails on the mast) , shifting Broodthaers’  bars in to the heaving beams and broken masts of a ship-wreck of meaning.


published in Ottawa by above/ground press
for the sake of the author’s participation in KANADA KONCRETE, verbi-voco-visual poetries in the multimedia age conference at the University of Ottawa, May 4-6, 2018
a/g subscribers receive a complimentary copy

Derek Beaulieu is the author / editor of 20 collections of poetry, prose and criticism including two volumes of his selected work Please No More Poetry: the poetry of derek beaulieu (2013) and Konzeptuelle Arbeiten (2017). His most recent volume of fiction, a, A Novel was published by Paris’s Jean Boîte Editions. Beaulieu has exhibited his visual work across Canada, the United States and Europe and has won multiple awards for his teaching and dedication to students. Derek Beaulieu was the 2014–2016 Poet Laureate of Calgary, Canada.

This is Beaulieu’s eighth above/ground press chapbook, after an issue of the long poem magazine STANZAS (“calcite gours 1-19,” issue no. 38), the interview chapbook ECONOMIES OF SCALE: rob mclennan interviews derek beaulieu on NO PRESS / derek beaulieu interviews rob mclennan on above/ground press (2012) and single-author chapbooks “A? any questions? (1998), [Dear Fred] (2004), HOW TO EDIT, Chapter A. (ALBERTA SERIES #8; 2008), transcend transcribe transfigure transform transgress (2014) and a a novel: 1-20 (2017).