above/ground press gets some globe and mail love! 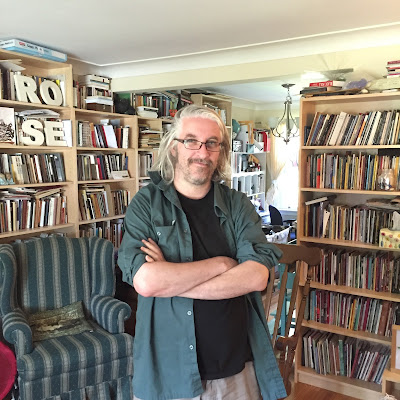 In case you didn't catch, Toronto writer, artist and filmmaker R.M. Vaughan was good enough to pitch and write a short piece for The Globe and Mail on above/ground press' twenty-fifth anniversary! Thanks so much! You can see the original article online here.

And, fyi, while above/ground press might be nearing 900 publications, that number might not be achieved until Christmas, or even the new year (we're in the 860 range right now). But that's okay.

Vaughan is also the author of two publications through above/ground press, including half of issue #8 (with Judith Fitzgerald) of the long poem magazine STANZAS, with his poem “HOW TO SPEND MOST OF YOUR TIME ALONE AND STILL WRITE CONVINCINGLY ABOUT SEX” (May 28, 1996) and the small chapbook 14 Reasons Not To Eat Potato Chips On Church Street (April, 1999).

R.M. VAUGHAN
SPECIAL TO THE GLOBE AND MAIL

A lot can happen in 25 years. Ours are busy times. And then, there’s publisher Rob McLennan.

The Ottawa writer, himself the author of 30 plus books of poetry and fiction, runs Above/Ground Press, a micropress specializing in chapbooks, broadsheets, quarterlies and zines. This year marks Above/Ground’s 25th anniversary – and it’s close to prepping its 900th publication.

When asked about recent Above/Ground publications, McLennan responds by sending a box crammed with 20 new titles, including works by Natalee Caple, Gary Barwin, Joe Blades and Stephanie Bolster, as well as several issues of Touch the Donkey, a poetry magazine similarly stuffed with new works.

McLennan seems surprised by the numbers himself.

“Odd to think that my ‘forthcoming’ list is larger than most chapbook presses’ entire publishing catalogues. I’ve been doing it for so long that it is simply a part of my practice. And it’s bloody good fun. I told myself years ago, that if I stop having fun doing something, I should no longer do it, and now both Above/Ground press and my reading series, The Factory Reading Series, are 25 years old. The Ottawa Small Press Book Fair turns 25 in fall, 2019.”

“I get to spend my days writing and thinking and reading (in between the requirements of a household and two small children); how could that not be seen as the most glorious fun possible?”

Above/Ground is funded by a devoted subscription base, people who “want everything the press makes in a calendar year,” McLennan tells me, plus online sales and book-fair sales. Above/Ground also swaps works with micropresses around the world.

“I didn’t get into small publishing because I like math,” McLennan says.

But the actual labour? It must be exhausting.

McLennan shrugs off the question. “I fold and staple in front of the television during evenings, and have for the whole run of the press. Folding and stapling I can do as part of my evening not-writing downtime. I’m currently on my third long-arm stapler over the 25 years of the press! I’ve most likely worn off my fingerprints by now.”

Being a publisher and a writer is tricky in Canada. Being a self-publisher and writer even more so (McLennan contributes to various Above/Ground titles occasionally and is of course the main editor). Canadian publishing, and arts in general, prefers clear divisions between creators and managers, makers and gate-minders. Again, McLennan is not fussed by such distinctions.

“I grew up on a farm, so I was raised with the idea that one exists in a community in which we all have different things we can do for the group. This is what I can do, so I try to do it for as many writers that appeal to me as possible.”

But McLennan is far from naive about the business – and anxieties – of publishing while writing.

“I’ve realized that those who are seriously interested in being ‘career’ poets might initially be interested in what I’m doing, but very quickly move on. I’ve had multiple young poets over the years realize that there isn’t really anything I can do for their career, so I tend to get ignored, which I’m quite okay with.”

“Those that do love the [micropress chapbook] format, and see the format as simply a means to an end (i.e. getting the work distributed) are the ones that tend to stick around. They’re my people.”