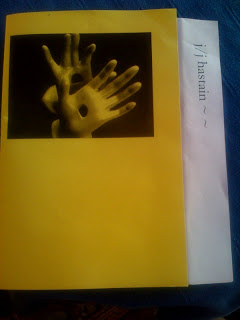 I don't know how I missed it, but Eileen Tabios reviews two j/j hastain publications, including hastain's above/ground press title [Tabios' photo of same, above], over at Galatea Resurrects #18. Thanks, Eileen!

See the entire review, here. I include but a fragment:

The yellow cover, as you can see, is thinner than the interior pages, beginning with that pale lavender page.   It's as if the cover cannot contain what is inside.  It's a perfect visual metaphor for how so many of hastain's poems -- including this chap-length one -- work: the poems reach out for engagement and often succeed. I love this highly-effective cover design!

Innervations of post-threshold threshing. Wanted all of your tattoos to be of wanting. Wanted you to come in my eyes so I could see. This dependency on ether-lipids. It matters to note that since then, we have never washed our sheets.

This poem, like many of hastain's, is enervated by the desire to create new worlds that go beyond gender as a reductive binary:

What other taunts in place of chronology or normativity?
Minarets seeping from ephemeral loins.

The language is paradoxically smooth -- the text flows so smoothly and yet carries a punch!

One should acknowledge the significance of the image on the front cover (palms with holes in their centers) as well as the epigraph:

In one section hastain writes, "In an attempt to get home we never rest." I first responded selfishly to that by hoping the poem's persona or hastain never gets "home"  because the attempt generates such wondrously alchemical results -- for example, how this same section ends with

Multiplicitous labors to upkeep divergent foundations. Fecundations. We believed in veer. Tactics and tacits. Creamy ratios. The moon was this world's first cave.

But, more importantly, the phrase is "...we never rest" not "...I never rest".  hastain may be depicting an interior passage but what hastain's opened up as a possibility is that there is/are others within one and it wouldn't surprise me if hastain would be open, too, to being part of other's or others' interior explorations.  A "hole" -- as is the case with certain Native American weavings -- represents a space for entry by others...

If the hole is within a proferred hand rather than more obvious alternatives, isn't the offer more intimate? More difficult to resist ... more easy to accept...?