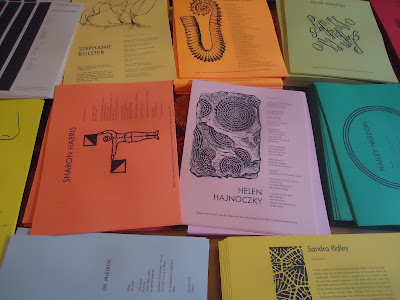 In case you might have seen via social media, on Tuesday night we launched the press' silver anniversary broadside series, copies of which we can now offer to the public! (while supplies last, obviously); fourteen single-poem broadsides by a variety of above/ground press authors covering the quarter century of the press' ongoing production!

The broadsides were typeset in Futura and Minion by Christine McNair who takes perverse pleasure in the irritation that typeface choice may produce. There are reasons. Not the least of which is that they’re hearty enough to stand up to the photocopying and she tired of weeping at disappearing serifs from prettier typefaces. She embraces the ubiquity. The two typefaces work together in a crooked way that she finds pleasing.

The broadsides were copied onto cardstock by Rytec Printing. The envelopes were individually stamped with gold foil using a Kwikprint. 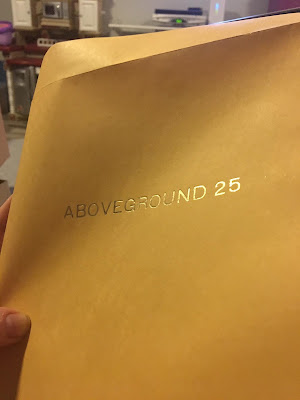 To order, send cheques (add $3 for postage; in US, add $5; outside North America, add $8) to: rob mclennan, 2423 Alta Vista Drive, Ottawa ON K1H 7M9. E-transfer or PayPal at at rob_mclennan (at) hotmail.com or the PayPay button at www.robmclennan.blogspot.com.