new from above/ground press: After the Battle of Kingsway, the bees— (second printing), by Renée Sarojini Saklikar 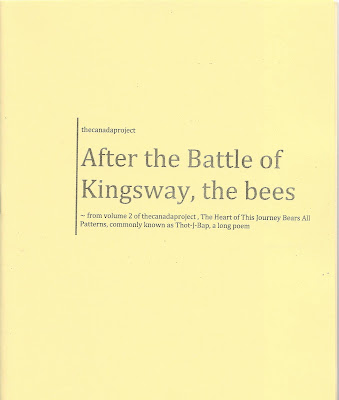 After the Battle of Kingsway, the bees—
Second printing
Renée Sarojini Saklikar
$5

In the Dry, (A)bigail happy to rest with Patsy

Afternoons, side by side, counting Carder
Anthidium on white clover, borage, bellflowers
outside Rentalsman, tennis courts blackened—
to be spectator: luxury. A book, opened,
laptop and free access:

Of demonstrations, nothing. The populace, un-
willing, no more, the people, dis-
satisfied, uneasy, intent on survival, a dis-
parity, only in the coveted sectors behind
barricades. A ground offensive.

Renée Sarojini Saklikar recently completed her term as the first Poet Laureate for the City of Surrey, British Columbia. Her latest book is a B.C. bestseller: Listening to the Bees (Nightwood Editions, 2018). Renée’s first book, children of air india (Nightwood Editions, 2013) won the 2014 Canadian Authors Association Award for poetry. Renée co-edited The Revolving City: 51 Poems and the Stories Behind Them (Anvil Press/SFU Public Square, 2015,) a City of Vancouver book award finalist. Renée’s chapbook, After the Battle of Kingsway, the bees, (above/ground press, 2016), was a finalist for the 2017 bpNichol award. Her poetry has been made into musical and visual installations, including the opera, air india [redacted].  Renée was called to the BC Bar as a Barrister and Solicitor, served as a director for youth employment programs in the BC public service, and now teaches law and ethics for Simon Fraser University in addition to teaching creative writing at both SFU and Vancouver Community College. She curates the popular poetry reading series, Lunch Poems at SFU and serves on the boards of Event magazine and The Capilano Review and is a director for the board of the Surrey International Writers Conference. Renée belongs to the League of Canadian Poets and The Writer’s Union of Canada (TWUC) and is active on the TWUC Equity Committee. She is currently working on an epic-length sci-fi poem, THOT-J-BAP, that appears in journals, anthologies and chapbooks.