Julie Mannell reviews Dana Claxton’s The Patient Storm (2016) and Renée Sarojini Saklikar’s After the Battle of Kingsway, the bees (2016) in Arc Poetry Magazine #85 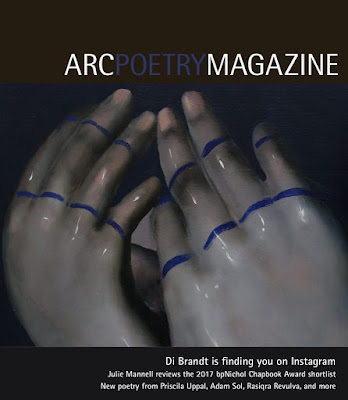 Writer and critic Julie Mannell was good enough to review Dana Claxton’s The Patient Storm (2016) and Renée Sarojini Saklikar’s After the Battle of Kingsway, the bees (2016) as part of an omnibus bpNichol Chapbook Award 2017 shortlist review in Arc Poetry Magazine #85 (why, yes, copies are still available of both of these chapbooks; why do you ask?). Thanks so much! While this is the first review of Claxton’s chapbook, this is actually the third review of Saklikar’s chapbook, after Nikki Sheppy was good enough to discuss it in filling Station magazine, and Scott Bryson was good enough to discuss it over at Broken Pencil. Hooray!


Dana Claxton’s The Patient Storm is an anarchic and playful book of musical dialogue-poetry that is wholly original. It can be read as containing one or a series of rambunctious speakers—through unmetered short paragraphs that are set in the top of the page and are distinguished by a characteristically bouncy tone: “Calm. Still. Quiet and such. Ohhhhhhhh Stormy Storm… when they arrive and when they do… turbulency baby for me and you.” The poems read like Heather Christle had a baby and then let Steve Roggenbuck raise it. The tone is also reminiscent of a kind of new voice that is arising in Canada—one that is quick, punchy, and has a self-aware sense of humour—I would turn to Toronto-based MLA Chernoff as an author who embraces similar linguistic play in their work, as well as several of the authors publishing through Montreal’s Metatron Press.

After the Battle of Kingsway, the bees by Renée Sarojini Saklikar offers an anatomization of what could maybe be considered a relationship or perhaps a series of interactions as they relate to space. There are at least four central characters whose relationship to each other and the speaker is left ambiguous—as well as several others who play supporting roles. This book is perhaps best described as a poetic experiment in world creation as the poems themselves exist in a hive all their own while continuing the very Canadian tradition of incorporating a voluminous expanse of nature symbolism. Though, it must be mentioned, in the fictionalized Battle of Kingsway, the natural world is almost a character in itself and lines like: “She calls them Finds. Her teeth, bones, unexamined. Afternoons the heat: dust, that acrid curtain, wind whips red” occasion a foreboding tone that mystifies each text and imbues an overall enchanting effect on the chapbook as a whole.