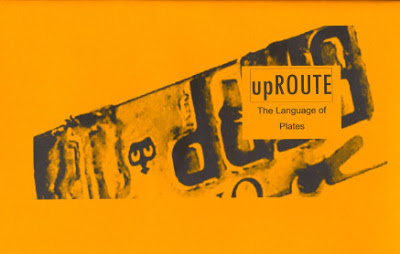 Eileen Tabios was good enough to provide the first review for Sacha Archer's upROUTE: The Language of Plates (2017), alongside his NOTES ON THE SIGN OF POETRY: ADDENDUM AND PRINTS (The Blasted Tree, 2017), in the new issue of Galatea Resurrects. Thanks so much! You can see the original review here.


upROUTE: The Language of Plates

Reading Sacha Archer’s upROUTE: The Language of Plates took me out of my kitchen and brought me to a diner. I suppose it could have been a coffee shop but somehow it was a diner—the ubiquitous one on the Upper West Side of Manhattan where I spent a lot of time at the counter looking down at … plates. (To be more specific, “Tom’s Diner” which obviously was popularized by Suzanne Vega who used to sing on campus at Columbia/Barnard when she and I were both students there.)
There are plates, of course, in my kitchen but being brought to that diner means, I believe, a place where one is by one’s self, perhaps with a notebook, looking down at a plate (scrambled eggs, grilled potato cubes and ketchup), a mug of coffee nearby. I repeated that position numerous times for years as a former resident of that Upper West Side.
In that position, I looked down at plates—full, half-full, then empty. You know how some joggers say that going for a run can help them clear their mind and then end up focusing perhaps on something of deep concern? I know that feeling from going by myself to diners and eating by myself. By the time I finished my plate, I’d also come to some resolution over something-or-other in my mind. (Don’t go there—I  also used to jog…)
All this is evoked by reading upROUTE: The Language of Plates. Some of the pages contain words and symbols with unknown significances, followed then by some pages of poetry from which one can discern sufficient relationships to the marks on prior pages. So what happened was sighting, then consideration, a mulling over, and then some insight. Love it. I love, too, the way the process is discernible. Here’s a for instance, from two consecutive pages in the chapbook:

What do plates have to do with such? Well, one looks at a plate. A plate offers something edible—that the viewer can (ahem) chew over … ruminate over: a mulling over. If insight follows, what the plate offered was sustenance. And the insight travels…upROUTE by rising from the plate towards you.
All that happens between you and the plate. Thus, again, not my kitchen where it’s populated by other creatures who distract but a diner where (despite the possible crowd) I am by myself. To be by myself ensures a direct, unmediated engagement between me and, uh, what’s on my plate.  Again, another fruitful example from Archer’s:

Regardless of the specific instances offered in the pages, I think the take-away can be larger: it can be about the merits of solitude, of making up your own mind instead of being (over-)influenced by others, by having the trust in your own abilities, by letting your imagination roam, by trusting that you can surface poetry. Through Sacha Archer, plates apparently have a large vocabulary.
Recommended for an immensely satisfying reading experience.
*
The chap was published by above/ground press, a reminder yet again of how much great work is being produced among indie presses.  Kudos as well to poet-publisher rob mclennan.