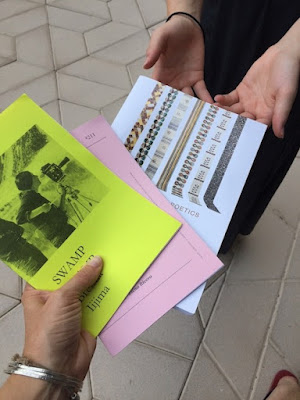 Chicago writer, artist and critic Jill Magi was good enough to provide a review for Brenda Iijima's SWAMP SWAMP (2017) via the Harriet blog, alongside reviews of Eléna Rivera's recent Belladonna* Chaplet and A Transpacific Poetics, Edited by Lisa Samuels and Sawako Nakayasu. Thanks so much! And we must have similar tastes to Magi, given Rivera's recent above/ground press title, and even Samuels' long ago issue of STANZAS [see the STANZAS bibliography here]. This is the second review of Iijima's chapbook, after Greg Bem reviewed such over at Yellow Rabbit. You can read Magi's full review here. Her review of Iijima is below:

In the photograph on the cover of this chapbook, Robert Smithson stands behind a woman, Nancy Holt, who is looking through a camera, operating it. Bob Smithson, arms folded, squints to see what she may be seeing. He is directing. As a project of resistance and disruption, Brenda has listened to Holt and what it means to not hear her clearly. And so Brenda doubles the film—hence the title SWAMP SWAMP—inserting an imagined texture, a talk-back session emanating from Holt, from the land itself, and from the forces of history.

I recall the Smithson show at the Whitney that Brenda refers to in her short essay at the end of the chapbook—and I distinctly remember loving the physicality of this film. The audio was disturbing to me as well; as if Holt was being pursued by Smithson’s ever art-forward purpose. I may have given over to the work, in a sense, deciding that the tension between them added to the disturbing rattle of the blindingly tall stalks of marsh grass. All of these memories mean that I was happy to revisit this work with the arrival of Brenda’s chapbook.

SWAMP SWAMP begins with the italicized line “Just walk in a straight line,” evoking obedience, discipline, and the language of poetry itself. It is Smithson’s voice. There’s an air of dismissal in the word “just,” and that word comes up again in the directives, indicating that Holt was taking some risks, displaying hesitancy. The first line is a directive to ignore the poetics of the meander, but Brenda, happily, intervenes by responding to all the directives with a lush interiority, and with historical remembrance.

Brenda writes the swamp as place and relationship—even though the site was really a marsh, as she points out. She returns the site to the complex ecosystem that it is, resisting easy access, comprehension, and the view that would call this site “nowhere”: “Some would call this no-man’s land—it is precisely the reverse.” At first I thought the reverse of “no-man’s” might be “everyone’s” but I don’t take Brenda’s project to be a universalizing gesture—so I came up with “yes-woman’s land” as a kind of “reverse,” though Brenda recognizes this land as already-inhabited, not empty, and so the text establishes itself as a North American post-colonial reclamation.

There are also snippets of Holt's autobiography: “My house was Tudoresque—a brick and stucco edifice. And the formative years, carefree—blithely unaware of what privilege consisted of besides the tree lined streets of the neighborhood where I would play unrestrained. How straight a line! How straight can I enter—logic to do with the body often foregrounds mechanistic functions, meanwhile hormonal impulses steer corporeal mass, meter motor control.”

It is glorious to me that Brenda has brought both “privilege” and “hormones” into the work—and in such close proximity! Yes, a body is not just mechanical—it is comprised of the perforating combinations of mechanics, chemistry, feedback loops.

Importantly, though, a woman’s body, as Brenda writes, is variously “unrestrained” according to class, color. And so Brenda moves this work away from a predictable and perhaps tired white feminist reclamation project that would position Holt as only oppressed vis a vis Smithson. Holt, spoken through Brenda’s voice, is, in fact, not without privilege. And so the complications gather.

I have always thought of Brenda’s poetry and editorial work to be pedagogical, an invitation for more voices, more inquiry, and an invitation to leave the traces of inquiry inside the work. And Brenda’s mode of inquiry always involves the body: a sensual epistemology. The chapbook’s culminating statement provides information on the project’s origin and this gesture of disclosure has the potential to inspire other projects. Her statement/essay concludes with this:

“A whispering subtext—an underlying dimensional reading into the triangulation: Robert Duncan’s poem of utopian yearning to return to the meadow of his imagination. The contrast between Duncan’s ideal meadow with a space that can’t hold out against chaos, disturbance, domination and appropriation—that is constantly managed and defined by historical ramification, lives in layer of relation and recognition.”

Reading this work, I would add that “a place of first permission” (Duncan’s line, quoted by Brenda) may also be a site, upon review, of misrecognition. Brenda’s work here takes the slippage of mishearing and misrecognition as the perhaps ideal site for poetry.