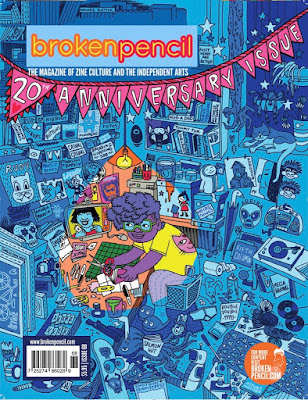 Michael Lake was good enough to review Jason Christie’s Cursed Objects (2014) in Broken Pencil #68. Thanks so much! As he writes:


Jason Christie has a strange way of looking at the world. He sees objects as cursed, not in a supernatural way, but rather, as he explains in the author’s note, because the objects “have achieved an uncomfortable new role, namely that of reflecting our twisted sense of domination.” The poem “Bell, book and candle” might be the most straightforward example of this notion, where each object’s function is willed by the object itself, casting a dark shadow over the idea they are simply instruments of our own design.
“Henge,” one of the best poems of the lot, employs a much wider stare to explore a similar idea. The creating of henges, in essence, is an ancient practice by which humans have externalized their primacy (over land, over people, over gods) using earth and stone. Christie looks to modern practices for equivalents and what he comes up with is rather bleak: “a voice alone / rises to say anything / begun today will fail.”
In all of these poems, Christie seems to be telling us that the trust put into the objects we surround ourselves with is misguided; we’ve created a world of falsities where even “a stone road / lengthens my / journey.”
Christie’s playful and inventive language is both a challenge and a delight to read. He is equally concerned with the limits of language in describing a challenging world, and the poems often devolve into fragments and deconstructions, with words breaking apart on the page to form new, invented terms. This is all done with an assured voice and an expert hand.