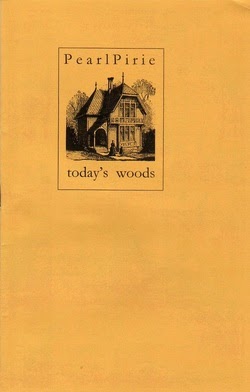 Poet and critic Frank Davey was good enough to review Pearl Pirie's today's woods (2014) over at his blog. Thanks much, Frank! Usually we have to wait weeks or months for a review, and he posted one before I even finished sending out subscriber copies!

This very small chapbook came in the mail yesterday along with several other subscription items from rob mclennan’s also small but many-windowed publishing emporium. Once past the cryptic title, this one is more than worth the price of subscription.

The long lines of Today’s Woods retell the story of the Three Bears’ apocryphal encounter with Goldilocks – including several non-Goldilocks versions that preceded the 1918 one that turned out to be “just right.” And Pirie’s lines are long – editor mclennan works hard to confine them to their pages, reducing all four margins, and in one case running a line across the gutter onto the adjacent page. So there's a lot of words for only 4 pages.

The retelling filters the familiar Eurobear story through the “woods” of both current cultural politics and the physical and behavioral attributes of Canadian grizzly bears. Who cooked the porridge, she asks – was it mom or dad? – which do the details of the story imply? Why did the bears go for a walk and allow their bowls of porridge to reach their varying temperatures? Would bears so skillful as to be able to cook porridge be unwise enough to let it cool? Why is each bear “oblivious to all but own distress. no apparent care about tampering with child’s objects, only each to self, my chair! my bed!”? Is Goldilocks a runaway? Does her occupation of baby-grrrl bear's bed constitute a symbolic sexual assault? Is she a colonial home-invader in a house of indigenous non-white bears? “side note: these are not polar bears in cultural transference to Canada. culturally coded against dark-toned dark-haired bears to be threatening.” The bear parents use the incident to teach their daughter that “she must be self-reliant because humans are running feral”. Like a reality-TV star, Goldilocks labours to believe her own implausible excuses. “Goldy went to therapy to talk about” taking “refuge in good conscience in what she thought / was an abandoned cottage, / despite the fresh cooking scent / and fresh bouquets on table”.

But Goldy cannot get out of the woods in this skillfully and amusingly critical parable -- because those woods were darker and more complicated even back in 1918 than we readers first noted. Dark and complicated woods, which in Pirie's interrogative narrative become fresh woods too.

On the last page of the chapbook is a note that Pirie has a larger book coming from Toronto’s BookThug next spring. Could be interesting.