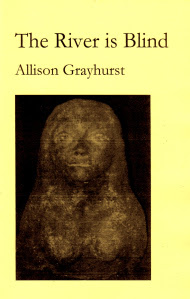 Ryan Pratt was good enough to review recent above/ground press titles by Allison Grayhurst and Shannon Maguire over at the ottawa poetry newsletter.

“He came. He is what everyone needs
But the pavement is thick
the ground beneath is rich
saturated with worms,
moving
thick
with worm motion
moving
at worm speed.”

This stanza, snipped from the tail-end of “In the Thighs”, illustrates an existential curiosity that courses through Allison Grayhurst’s latest collection. We’ll get to the “He” part in a minute. But first, it’s Grayhurst’s physical constraints that comfort us: a box sitting at the top of the stairs, housecats in states of wakefulness and sleep, the “snails and moss” that preoccupy her. Indeed, The River Is Blind situates itself firmly in the familial but imbues those relationships and domestic touchstones with a disembodied calm. Ambition and disenchantment linger along the fences of Grayhurst’s property but she remains candidly in the present:  embracing “the comfort of sweaters and knitted socks” for “First Snow of Winter”, “the child sitting and staring and waiting for the coin” in “Wallpaper Stars”.

In lesser hands, muses such as these might’ve resulted in verses of weak-kneed contentedness. But Grayhurst’s voice remains one of detachment, webbing daily pleasures into greater meditations on love and God – the “He” that churns The River Is Blind’s family soil. Through spiritual lens, poems like “Everything Happens” and “Flies” counteract steadfast faith with insights on the material world, a separate world; a place where people grind flowers for honey. From “Flies”:

“What faith was plucked with the flowers
as all their little tongues reached out to pocket
the short-term scent?”

Naturally it’s a tad intimidating when the first word of a first poem has you running for the nearest dictionary. But “epoché”, meaning to suspend our understanding of the external world in order to relate to phenomena on a purely conscious level, proves more an ideological gateway for Shannon Maguire than a term reserved for Greek philosophy. In A Web Of Holes, epoché operates as a palette-cleanser, an italicized provocation plopped down as if to ready us for enlightenment, however fleeting.

The delight of Maguire’s long verse doesn’t lie at the heart of some mystic truth but in the trail of crumbs by which we readers become seekers. Ringing true to my newfound understanding of epoché, her language prefers a disorienting narrative, one that repeatedly suspends our ability to find grounded context amid visceral and scholarly hurdles.

Besides illustrating her palette for abstract sensuality and Greek imagery, this excerpt identifies A Web Of Holes as acrostic; E, U, R, Y, D, I, C, and E trafficking the bulk of Maguire’s verses in honour of Eurydice, wife of Orpheus. This opens up some juicy parallels between ancient lore and Maguire’s sharp insights on the ownership of femininity. A temperamental breakdown in syntax midway through introduces a conflict in reinterpreting Eurydice’s tale; a commentary on the myth-making roots of Greek literature, perhaps.

You may wish to keep that dictionary handy but A Web Of Holes wouldn’t be nearly as exciting without its obfuscations which, with a bit of a learning curve, unveil ephemeral gems of raw, almost carnal, beauty. To close, here’s an example of Maguire’s hard-fought harmony:

“Evening’s gaze, the limit of voice
Unison of suspension
Ritenuto.
You watch them
Dying
It is a bright and chilly morning
Collapse, there are still not
Enough independent girls

Eglinton at five am, floating
Ukiyoe
Rebuilt from a country road
You watch them dreaming
Date the world from those Cordova Street cherry blossoms
Ink brushes against her forehead
Cassanation of gossiping motors
Eviction notice floating, floating”