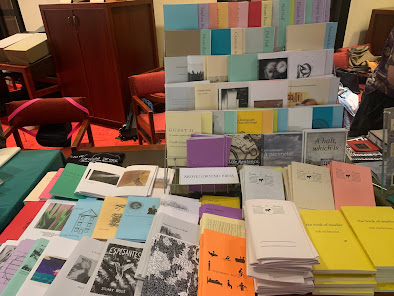 So: this past Saturday above/ground press was in Toronto as part of the Fisher Small and Fine Press Fair, an event that has returned after a three-year (covid) hiatus! Plenty of (masked, mostly) fun was had by all, and I was even able to introduce the chapbook rack that Christine found a while back on one of her buy-nothing groups (honestly, it worked far more effectively than I might have considered, so expect to see it returning for future fairs). It was good to get the whole top row-plus of the festschrifts I've been putting together over the past year, able to actually sell copies of some of them, which is nice (oh, so that's what these are).

This was actually the fourth curated fair in the Thomas Fisher Rare Book Library at the University of Toronto (and a limited curation, given the physical limitations of the space), as librarian John Shoesmith originally founded the event around an exhibit of small press items from their collection that above/ground press happened to have items as part of (which is how I got invited). I was there for the first event (which Ryan Pratt was good enough to recap over at his blog), and even the second! Apparently the hopes is to curate a new version of the event every two years, so hopefully they can get back on that particular schedule for future events.

And I was able to see so many folk I hadn't seen in moons! Why does Ken Norris (who lives in Toronto these days) look no different now than he did twenty years ago, when I last saw him? I mean, I've done numerous chapbooks of his lately (his tenth above/ground press title landed this past July), so it isn't like we haven't been in touch, but odd to think how long it's been since anything in-person. It was also good to see folk such as Aaron Tucker (with a new knife fork book title), Ralph Kolewe (who has a forthcoming Talonbook, the manuscript of which expands upon his above/ground press title), Christopher Patton (who I met for the first time, coming by to collect his copies of his new above/ground press title), Andrew McEwen (should we do another chapbook? we should probably do another chapbook), Lindsay Zier-Vogel (honestly, I simply presumed we'd met years earlier at something, so it was good to finally correct that), Cary Fagan (who mentioned I'd published his stepson in an issue of Touch the Donkey, a connection I wasn't aware of), Bruce Whiteman, etcetera. So many people!

Should I mention I spent the afternoon pretending not to eat an egg and bacon English muffin? Probably not, given it was in a library, after all. Fortunately, I am very effective in my pretending. Other exhibitors included Aliquando Press, Alan Stein/Church Street Press, Art Metropole, Book*hug, Coach House Books, George A. Walker, Greyweather’s Press, JackPine Press, k|f|b, Liz Menard, Massey College Press, Natalie Draz, Nietzsche’s Brolly, Porcupine's Quill/DA, Shanty Bay Press and Wesley Bates. 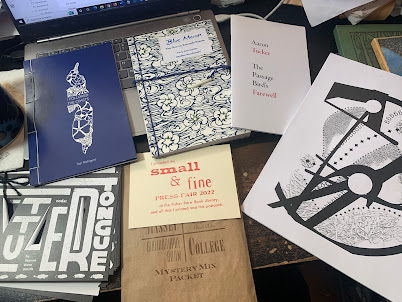 Given the hour it took to drive in from Andy Weaver's house out in Burlington on Saturday morning, I secured the "final table" in the space, set between JackPine (doing some neat things I hadn't seen physical copies of for some time) and Massey College Press (college printer Kit MacNeil is clearly doing some interesting things worth paying attention to), who were doing some very cool things, including allowing the public to letterpress print upon wee postcards! I collected a small handful of publications, although not terribly much (Kirby exclaimed, when I went to check out the k|f|b table: Why are you looking? You have everything!), and even managed issue five of JUST LIKE CREAM BUT WORST that Daniel F. Bradley handed over when he wandered by (we traded publications, naturally), which includes a new interview he conducted with Alice Burdick (email him at fdriveshesaid (at) gmail.com if you might be interested in attempting a copy). 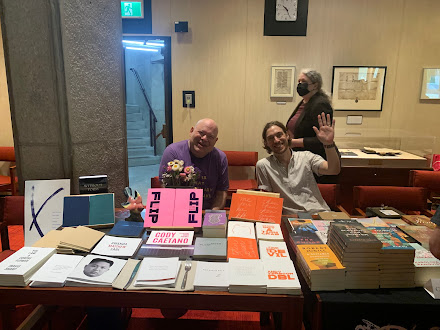 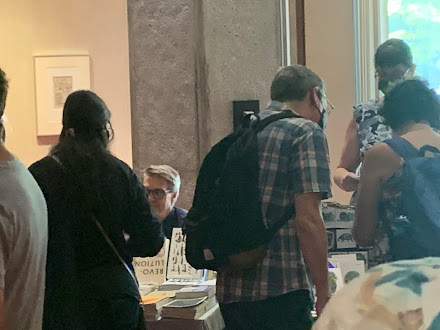 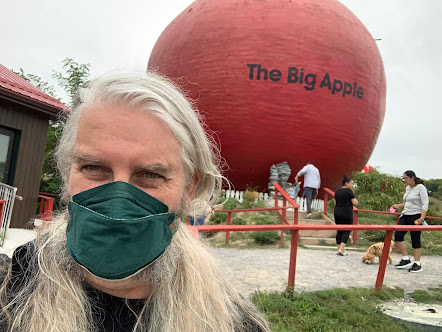 And after: I even got to hang out with Andy Weaver and Stephen Cain. And the drive home? Hitting the Big Apple, of course, to collect nonsense as wee gifts for the children. I think I got them pens with different coloured inks, and some Pez. Who doesn't love the Big Apple? Scream until your mother stops the car, I say. Oh, and there's another small press fair I'm returning to Toronto for on the 24th, curated by Kate Siklosi as part of TIFA; and of course, the ottawa small press book fair in November. Might we see you at either of those?