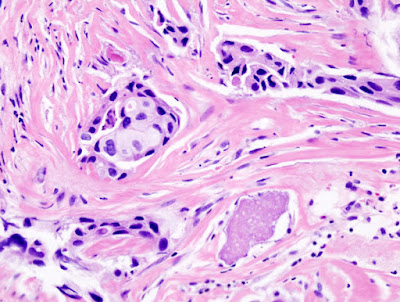 Think of dead tissue as deposited in language and writing, as the compost heap in which present language and writing grows. Suppose dead tissue as comprising an historical unconscious lived out as perception, as smell and taste, as speech. Imagine consciousness resounding with an inexhaustible repository of tissue, as a cave to be mined. And consider poetry as that mining, so the incorporation of dead tissue (call them prior texts) into a work is not simply collage or a familiar, almost comforting, defamiliarization technique, but the spiritual domain of poetry, its subject (subject-ness) percolating through.
Tissue not dead then, though their origin is past. Or tissue dead only in the way a culture may die, be lost, its people vanish without records or monuments or memories. Tissue, then, not so much dead as submerged, melted, transubstantiated, absorbed; everywhere informing but no where fully explicable. Yet such tissue are neither solace, as a past to which we can turn, nor tools to represent the present. In this sense, dead tissue are not the stars but the heaven in which the stars gleam, not tools but tolls.
This sense of “dead tissue” turns the phrase into an oxymoron; for tissue cannot die though we may seek to kill them. Kill them in rage that we are the mortal but they are not (“the body dies, the body’s beauty lives”). Or kill them in that perverse homage we call display: hod up, inspect, collect (as the father kills the moth for his son in Stein’s The Making of Americans: “caught him and killed him and pinned him”). Here is the root of what, ungraciously, I call tissue-ational mimesis: that tissue are static objects that can be accurately portrayed. The controlling impulse to “catch and pin” collects much more that the putative tissue; the desire to represent overwhelms the tissue represented. Thinking, which is the living idea of tissues, their flesh, consists no in representations of concepts but in a fabric or nexus of relations. Tissues are always syntactic and prosodic, constituted by the interaction of different kinds of elements—scenic, associational, historical, economic, tonal—and as such are never reducible to one type of image.
So a second sense of “dead tissues”, suggesting a rule of always-already formulated concepts, habits of agreement running roughshod over newly formulating vistas. Call it a necroidiocracy, ideas stiffened by rigor mortis wounding flesh with their rigidity and tenchorationality: the arrogance of logic and the perniciousness of the “common sense” stereotype, each disguising its biases in the shadows of its neutrality.
Language is the first technology, the extension of the body outward toward an articulation, forging, of the world, which is immediately transformed by this act, hence a forgery. As Stein so majestically shows in How to Write, tissues are to be enacted not entombed. Words, that is, do not signify tissues; rather, ideas are forged in the ovens of historical language practice, which means as visual representations and as sound.

Katie L. Price’s writing—critical, creative, and other—has appeared in such venues as Fence, The Journal of Medical Humanities, Canadian Literature, and Jacket2, and with such presses as No Press, above/ground press, and Manchester UP. She currently directs the Academics department at a college access and success nonprofit, serves as Interviews Editor for Jacket2, and co-directs the Philadelphia Avant-Garde Studies Consortium.

This is Price's second chapbook with above/ground press, after BRCA: Birth of a Patient (2015). 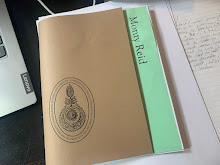