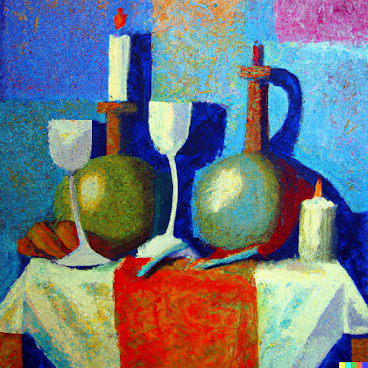 If I struggle to arrive like a union of treated pianos,
then I’ll bind to that sound some vitamin D and toast
if I'm a hot Monday wavering, then, look,
what a way to start writing without myself.
If I'm somewhat public in the public’s mind, I’ll listen.
If your body says walls are a problem
where forests mean otherwise than being
is it a fine memory itself becoming afraid to village?
Either way, if I've held you close enough in that moment
when the aesthetic clicks, then I'm expansive in the way
I've used the word relentless to describe reading,
quiet mornings in letters or a tantrum, a roundabout
or in a round, a resounding ballad of dissonances plays
and a coffee machine beeps: sound in a box.

I wrote the poems in this chapbook during a period of years where my language and memory were shattered by sleep deprivation. In order to keep myself connected to poetry, I started writing in a file about our life with young kids. I didn't think much about what I was writing. The point was to do it. I amassed a large repository of content, but I stopped adding to it as life found a new level.

While reflecting on how hard it was to remember anything as a result of years of disrupted sleep, I realized that what I had in the original file was literally stored in memory on my computer. I wondered if I could treat that original material with processes that would be similar to what was happening to my mind during sleep deprivation?

To replicate some of the effects of memory loss and the difficulty of thinking, I wrote Python scripts that cut up, recombined, and selected random lines from that source material. The results were a mess, but I edited them to try to make sense of the jumble that had once been rational.

Much like how memories are stories, how we gloss over the messy, difficult, or impossible to recall details, how we invent the connecting pieces to attribute to our memory a sense of completeness, I worked on the poems to attempt to let them become something new, an active remembering. Memory, as I now think of it, is not entirely an act of recall with varying degrees of fidelity, but also an act of creation. We look at the glossy or glossless images of our past and glue them together into a whole new collage.

cover image by the author

Jason Christie lives and writes in Ottawa. He is the author of Canada Post (Invisible), i-ROBOT (Edge/Tesseract), Unknown Actor (Insomniac), and Cursed Objects (Coach House). His most recent chapbooks are: Bridge and Burn (above / ground) and Heavy Metal Litany (Model press). He is looking for a home for a new manuscript of poetry he wrote with the help of several Python scripts, some of which appear in this chapbook.