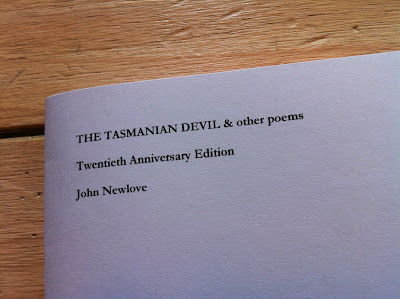 THE TASMANIAN DEVIL & other poems
Twentieth Anniversary Edition
John Newlove
with an introduction by J.A. Weingarten
$5

The streets are full of overweight corporals,
of sad grey computer captains, the impedimentia
of a capital city, struggling through the snow.

There is a cold gel on my belly, an instrument
is stroking it incisively, the machine
in the half-lit room is scribbling my future.

originally published in an edition of 300 copies by above/ground press, September 1999 as John Newlove's final publication of new work, after The Night the Dog Smiled (ECW Press, 1986).

The publisher wishes to thank Susan Newlove, and the estate of John Newlove for permission to reissue this title.

John Newlove (1938-2003) was born and raised in Saskatchewan. He began publishing while working various jobs in Vancouver in the 1960s. His many honours included the 1972 Governor General’s Award for his book Lies, and the Saskatchewan Writers’ Guild Founders’ Award. His works have been internationally published and translated. His posthumous collection, A Long Continual Argument: The Selected Poetry of John Newlove, edited by Robert McTavish with an Afterword by Jeff Derksen, appeared through Chaudiere Books in 2007, and is now available through Invisible Publishing.

J.A. Weingarten is a Professor of Language and Liberal Studies at Fanshawe College. His first book, Sharing the Past, was published by the University of Toronto Press in 2019. He is currently completing work on The Selected Letters of John Newlove.