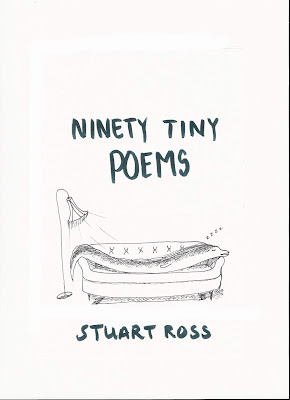 an eel
varies its
routine

Felt tired.
Lay down.
Woke down.

Piles of centipedes
quivered
in the starlight.

I slapped
his apology.
Kicked it.
Fed it.

the piano
rolled into the room,
played the guitar.

he protested his scabs.
a sign fell.
forty years passed.

Cover art and design by Amelia Does

Stuart Ross is a writer, editor, writing teacher, and small press activist living in Cobourg, Ontario. He was first published at sixteen, then began selling his self-published chapbooks on the streets of Toronto at twenty, and is now the prize-winning author of twenty books of poetry, fiction, and essays, most recently Motel of the Opposable Thumbs (Anvil Press, 2019), Espesantes (above/ground press, 2018), A Sparrow Came Down Resplendent (winner of the Canadian Jewish Literary Award for Poetry; Wolsak and Wynn, 2016), and the novel in prose poems Pockets (ECW Press, 2017). His novel Snowball, Dragonfly, Jew won the Mona Elaine Adilman Prize for Jewish Fiction, and his story collection Buying Cigarettes for the Dog won the ReLit Prize for Short Fiction. He also has scores of chapbooks to his credit. His writing has been translated into French, Spanish, Nynorsk, Russian, and Slovenian. Stuart is currently working on a dozen different poetry, non-fiction, and fiction manuscripts. His micropress, Proper Tales Press, is now in its 40th year (visit fortypropertales.blogspot.com). Support Stuart’s work at patreon.com/StuartRoss.

This is his second chapbook with above/ground press, after ESPESANTES (2018).