Cary Fagan reviews Stephen Collis, FIRST SKETCH OF A POEM I WILL NOT HAVE WRITTEN (2017) 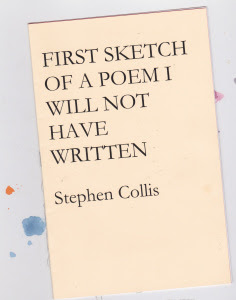 Toronto writer Cary Fagan was good enough to provide the first review for Stephen Collis’ FIRST SKETCH OF A POEM IWILL NOT HAVE WRITTEN (2017) over at his Bodies and Words. Thanks much! You can see Fagan’s post here. As he writes:

Stephen Collis, First Sketch of a Poem I Will Not Have Written.  Ottawa, above/ground press, 2017.
abovegroundpress.blogsplot.com

An emotion not felt so often in poetry is anger.  But I certainly feel it in Stephen Collis’ long poem (something above 150 lines) – anger at contemporary culture, at the stubbornness of capitalism, and perhaps at the corruption of poetry itself.  It’s full of interesting contradictions, the main one for me being that it is no flag-waving manifesto or populist call to the masses but instead intricate, fragmented, and often as not difficult.

At borders, frontiers, reaching into the historical moment of listening to insurrection and speech / spur and limit in place of the street / we have Facebook Google is a universe we No longer have to search the limits of the revolutionary subject lies elsewhere can we revive?

Sometimes he sounds like a tired and aging, but still raging lefty, hating the opium of the internet and pop songs that “tell us / nothing” (surely an unfair generalization these days).  He might be in an old-fashioned working man’s tavern, talking to a half-listening friend (“and sometimes David when I say politics / I mean poetics”), feeling defeated but with still some of the old energy in him.  His thoughts jump around, as if he might be half drunk or falling asleep-

There’s another moment when a name is mentioned, likely a wife or partner: “Late now. Sound of the furnace. Cathy out. Girls asleep.”  This also gives the impression of a restless and unhappy soul wrestling with defeats and losses in the dark hours. But the lines always have a clean, sharp edge, expressing an intelligent consciousness that feels to me trapped inside a spiral of argument, trying to find a way out:

As I read I began to expect some kind of uplift or release, some hope in the end, if faint or bleary.  Instead the poem ends in cynicism or perhaps just resignation: “god didn’t die / he was translated into money”.  But I took this as a momentary feeling, as if another moment chosen (five minutes before, one minute after) might have given us a different ending, a sense that the fight – in the street and on the page – must go on.