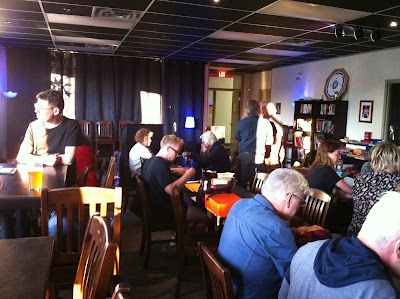 Thanks so much to everyone who came out this past weekend to the above/ground press 26th anniversary reading/launch/party over at Vimy Brewing Company! (and can you believe the 26th anniversary BIG SUMMER SALE ends today? I mean, really...) It was a grand event, celebrating twenty-six years of continuous activity and nearly a thousand (so far) publications going all the way back to those wayward days of summer 1993 (according to a poster, the first official event was July 9, 1993, back before most of you, and now, a couple of above/ground press authors, were even born). I've posted a couple of reports over the years from anniversary events (but never as many as I probably should), including the 25th anniversary (but not the second one, from the ottawa international writers festival, unfortunately), the twenty-third anniversary (including the Toronto event that same year) and the nineteenth anniversary (where are the rest? oh, the days and the years get away from me). Thanks so much to everyone who came out to read, listen and otherwise assist and help celebrate! (and to Pearl and Brian Pirie, who were kind enough to provide photos.)

I wore my snappy "above/ground press" t-shirt produced for last year's event (by Troublemaker Print!) but couldn't get anyone to purchase any (although more than a couple of attendees and readers wore theirs from last year). You can dress like me! I offered. That's not a selling point! Anita Dolman kept yelling, from the back of the room. I disagree, obviously (might it have helped if I'd shaved? No time! No time).

Christine was, of course, home resting given her recent medical thingies, but otherwise well. But there were a great deal of others around to assist in the above/ground press mayhem, including natalie hanna (who kindly worked the door), Anita Dolman (who kindly worked the book table for the second year in a row), Robert Hogg, Roland Prevost, Janice Tokar, Stephen Brockwell, Jean Van Loon, Grant Savage, Michelle Desberats, Hugh Thomas and maria erskine, jwcurry and plenty of others. It was a good crowd.

The first reader of the evening was Marilyn Irwin, who read from her fourth above/ground press title (and ninth chapbook overall), the day the moon went away, a chapbook already being discussed as her strongest work-to-date. There is something really powerful happening in Irwin's poems these days; crafting a rawness into shapes that feel effortless, and serene (and so obviously are not).

Pearl Pirie launched Eldon, letters, her fifth above/ground press chapbook, made up of a chapbook-length epistle to her late father, which included photographs and other archive materials alongside a lyric prose composed directly to him, that loss and some unanswered questions. Pearl was, also, easily the best dressed in the room (an idea everyone in the room easily agreed with).

I was very taken with Stuart Ross' latest, NINETY TINY POEMS, which is his second above/ground press collection (have you seen the blog I curate celebrating the fortieth anniversary of his own chapbook enterprise, Proper Tales Press?). Composed of nine poems, each of which has ten tiny sections, he had joked that he was working on a manuscript of "one thousand tiny poems," which might not actually be completed (but held to this singular chapbook). After the reading, he said that the positive response to the poems and his reading made him reconsider this idea (I would be very interested to see how far he might be able to go with this; wouldn't you want to see what Ross could do with ONE THOUSAND TINY POEMS? Honestly: who wouldn't? And if someone wouldn't, would you even want to know that person?).

Stuart's reading bled directly into Conyer Clatyon's reading, as Conyer appeared at the podium for the sake of an improvised collaborative sound poem or two with Stuart, before Stuart left the stage, and sat down. And Conyer begin to read from her above/ground press debut, Trust Only the Beasts in the Water. There is something about Conyer's prose poems I'm quite fond of, the flow of them; and it makes me curious to see her full-length debut next year, appearing with Guernica Editions.

After a wee break, there was Kyle Kinaschuk, who was good enough to travel from Toronto to read from his chapbook debut, COLLECTIONS-14. Given I hadn't heard him read before, let alone hadn't actually met him yet, I was curious to hear how he might perform some of these works. He did a magnificent job, speaking a bit to the compositional process of writing poems prompted by his father's death, and the baffles he utilized for the poems, put together from details of his father's life. He had mentioned that this was one section of what might be a book-length quartet of sections, and I am very much looking forward to seeing what that might look like.

Hamilton writer Gary Barwin (who also has a chapbook press, serif of nottingham, which turns (or turned) thirty-four years old this year) read, as part of his set to launch Dust of the Wren: poems and translations, a selection of unpublished pieces, suggesting that part of the appeal of the chapbook form is the quick ease with which new work can be disseminated. I'm absolutely fascinated with Barwin's comfort in visual poetry and surrealist lyric even as he has become the author of bestselling fiction, with a new novel already slated with Random House for 2021; and did you know he has a selected poems out this fall? There is an awful lot going on with his work, so it is very exciting to see it finally being taken seriously.

One of my favourites is Kemptville poet Chris Turnbull, who has long been, quietly and confidently, working in large forms utilizing lyric, the fragment and visual elements against ecological concerns. Did you see the piece I did on her work for Jacket2 magazine a while back? This chapbook, contrite, is the second of a projected trio of linked works, following Candid, a title produced as part of one of the dusie kollektivs (a work that is available free online, also).

There. Don't you feel bad you missed it all now? We will just have to do another for next year, then!

And should I mention: the event was successful enough I immediately took three more chapbooks to the printer the following day? And am preparing two more?

And: watch this space for the announcement for 2020 above/ground press subscriptions, yes? Sometime over the next month or so. I mean: the press produced sixty-seven chapbooks last year, so the subscription rate is a pretty good deal, I must say...