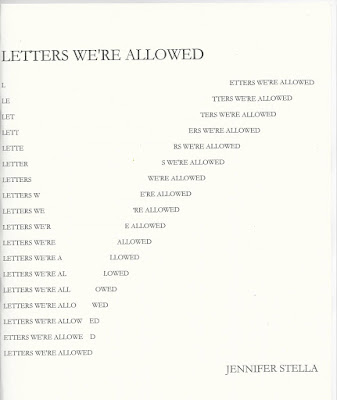 Luke Taylor Gilstrap was good enough to provide the first review of Jennifer Stella's LETTERS WE'RE ALLOWED (2019) over at River City Poetry; thanks so much! You can see the original review here.


Though Jennifer Stella’s Letters We’re Allowed  [Above Ground Press], an epistolary chapbook of prose poems in which two friends piece together life amid trauma from sexual assault, relies on its opening allusion to Jack Spicer’s “Six Poems for Poetry Chicago,”

The rind (also called the skin) of the lemon is difficult to
understand.

Tomas Tranströmer comes more to my mind after the chapbook’s conclusion. Like Tranströmer, Stella tosses images at the reader from all sides with little interpretation, primarily through the seemingly random signoffs of each letter.

Jenny Who Is Not Nocturnal and Thus Hella’fraid of Bats

Jenny Who Moves Martians, not Mountains

But back to that lemon. Lucky for us, if we are patient, Stella’s cleverness with Spicer (the speaker Jenny does later identify herself as “Interlocutors with Jack [Spicer]) comes through her form. Spicer, again, at the conclusion of “Six Poems for Poetry Chicago:”

It’s the shape of the lemon, I guess that causes trouble. Its
ovalness, its rind. This is where my love, somehow, stops.

If we step back and see Stella’s letters collectively shaped as the lemon the speakers Jenny and Sivan refer to throughout the book, suddenly the weight of rearranging, of solving instead of admiring and empathizing with, is lifted. Why rearrange a history that has already (artfully) been rearranged? Suddenly we see her ability to put a lot in a little, like in my favorite line from the book, when Jenny, whose trauma becomes gradually more detailed, is nevertheless able to identify herself as “Thingly.” That this small but strong self-qualifier immediately precedes the first mentioning of Jenny’s sexual assault makes “Thingly” all the more powerful.

Ultimately, Letters We’re Allowed inhabits the same question Wallace Stevens is famous for: How are we to reconcile reality to the imagination? Drawing from her medical background, Stella is no flowering optimist:

We use lovely language in medicine, except dynamic indicates disease […] You urge me to approach words with a scalpel, leave a poem with only functioning parts.

Still, there’s no denying the resiliency in these letters between friends and confidantes. After all, when events, timelines, signatures, etc., are all susceptible to the sudden shifts of a traumatized mind, what is the one constancy in these letter-poems? It’s so small I almost missed it. Look there, just above each signature: