above/ground press in Toronto : a report, 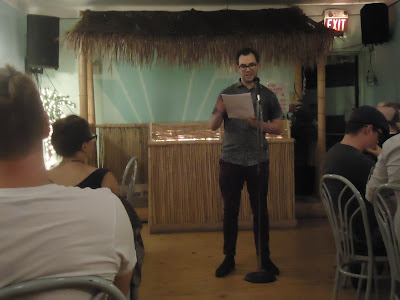 [Braydon Beaulieu, reading] above/ground press recently celebrated twenty-three years via an event in Toronto [don't forget the Ottawa event for same next week!] with readings and launches by above/ground press authors Braydon Beaulieu, Ashley-Elizabeth Best, Sean Braune, Stephen Brockwell, Sharon Harris, Hugh Thomas and Aaron Tucker at The Steady Bar and Cafe. Thanks so much to all who participated! 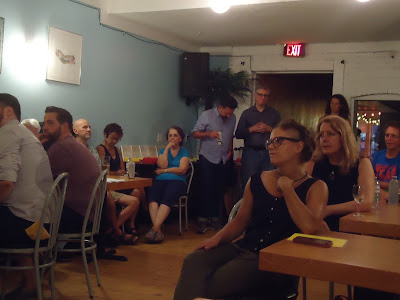 [the crowd] The crowd was good, with a variety of Toronto writers (and non-writers, most of whom I didn't know) attending, including Ken Sparling, Dale Smith, Natalie Zina Walschots, Kateri Lanthier, Richard Greene, Stan Rogal, Hazel Millar, Shannon Bramer, Jay MillAr, Teresa Yang, m erskine, as well as poet Doyali Islam, who generously donated her time and energy to work both door and book table. The venue, of course, worked perfectly, with thanks to them, as well as to Aaron Tucker, who secured it for me. 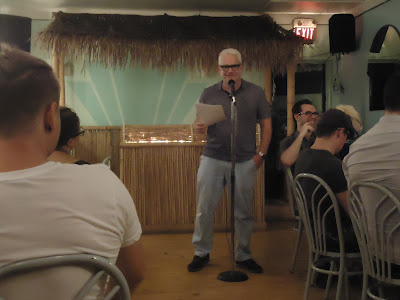 [Stephen Brockwell] Stephen, of course, was good enough to speak briefly to the volume and enthusiasm of the press over the years, especially given how close the press is to eight hundred publications (a dozen or so, I'd say, and still counting). Sometimes I'm even baffled by the amount of material I've produced through the press, although to me, the first decade is somehow the most impressive (that's when the struggle was far more than it has been since). 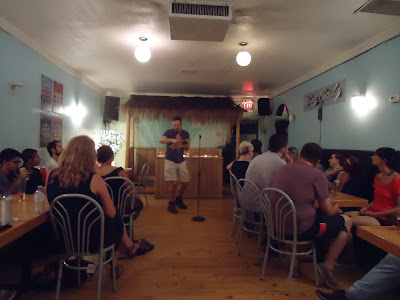 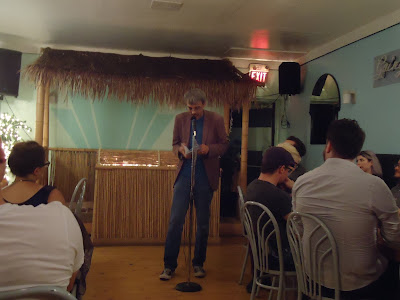 [Hugh Thomas] It almost makes me think I should be attempting anniversary events and/or general above/ground press readings in Toronto a bit more often. Although at least two in the crowd didn't understand, at first, that above/ground is an Ottawa-based publisher, and wondered why I'd pointed out the rarity of the Toronto above/ground press reading. Heck, at this point, I probably have enough authors around that I could easily do more than a couple of cities, whether Montreal, Vancouver or even an American city or two. The one time I did an above/ground press feature in New York, as part of the Boog City series in January 2004 (for the sake of the tenth anniversary anthology), we had to fly everyone in (Brockwell, myself and Clare Latremouille). 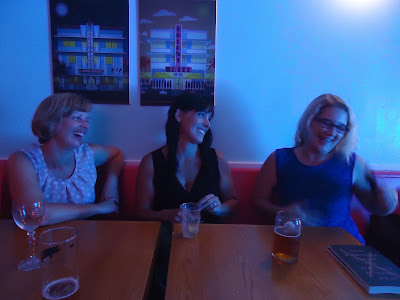 [Hazel, Shannon and Ashley-Elizabeth at the end of the evening] The high points were plenty and the performances great; the highlights would also include the fact that I hadn't actually heard Braune or Beaulieu (now that he's relocated from Calgary to Toronto) read before (both of whom are also reading at the Ottawa event), the stellar reading that Hugh Thomas gave, or even the fact that Shannon Bramer appeared (I've barely seen her in years; remember that chapbook I produced of hers, moons back?). 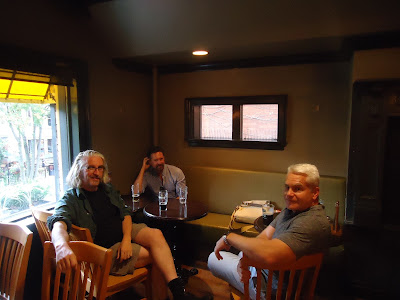