Now that the second annual VERSeFest is behind us, there are notes and reports popping up in various corners of the accumulated activity at our newest poetry festival (Pearl Pirie has a whole TON of photos here). For above/ground press authors Rae Armantrout, Barry McKinnon and Paige Ackerson-Kiely, these were their first appearances in Ottawa, making a series of rare occasions that much more impressive. Perth, Ontario poet Phil Hall, on the other hand, returned after numerous readings around Ottawa over the past decade as the most recent winner of the Governor General’s Award for Poetry for Killdeer (BookThug, 2011). 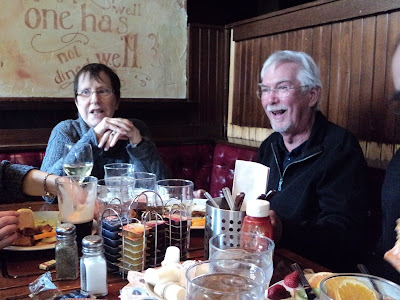 American poet Rae Armantrout [here a photo of Armantrout and McKinnon at lunch] gave a magnificent reading from recent work, including her chapbook Custom (above/ground press, 2012), which was, unfortunately, the only title of hers available throughout the week. See here, a photo Pearl Pirie posted from the event, as well as a report on the evening generally, and Armantrout specifically. Here, two days earlier, a photograph she took of Barry McKinnon. See here, Amanda Earl's report on the event. 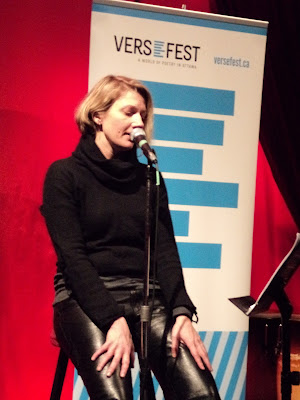 As The Factory Reading Series @ VERSeFest, Barry McKinnon and Paige Ackerson-Kiely presented informal lectures/talks to a packed crowd at The Mercury Lounge in the Byward Market, both articulating various aspects of recent work and how it had been created, informed and structured. Ackerson-Kiely spoke of her second trade collection, My Love is a Dead Arctic Explorer (Ahsahta Press, 2012), and McKinnon spoke of an ongoing project translating fragments of Dante’s Inferno, parts of which have appeared as the chapbook Into The Blind World (above/ground press, 2012) and in The Peter F. Yacht Club #16. McKinnon even distributed copies of his talk as a self-produced chapbook of twenty-six copies through his long-standing Gorse Press, When “I” Left the Stage: A Realm of Intention (January 2012). A small fraction of the essay reads:

When I started writing at the age of 16, I wrote fast, filling boxes with quickly scribbled lyrics dashed off with a sense of excitement and risk. I never know what I was about to say or where the page was to take me. Now I’m 67 and the energy and pleasure of the writing process hasn’t really changed, but I wait much longer between poems. I’ve had to learn patience. Much writing and thinking for me is practice in preparation for the event when the poem arrives.
I’ve also learned to live with another paradox of its activity: The poem simultaneously identifies its writer to the world, but only comes into being when the writer, so to speak, is out of the way. What a strange occupation and process that requires obliteration of self at the same time that it reaffirms it. I think I knew this early on. 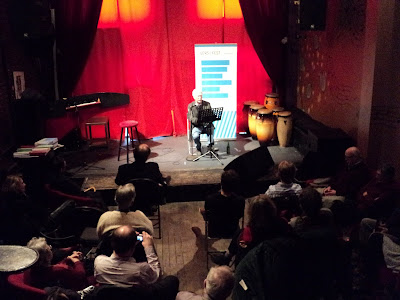 The event concluded with a lively (albeit brief, for the sake of time) question and answer session. Both pieces will appear later on this year in the fifth issue of seventeen seconds: a journal of poetry and poetics. See Pearl Pirie's magnificent report on the reading here. 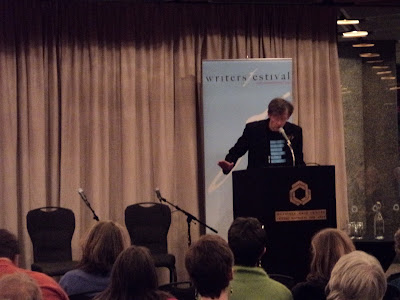 Phil Hall, reading at the final event of the festival, the “Summit Reading,” shared the stage with American poet Philip Levine and Mexican poet Pura López-Colomé. For his opening set, the collage of Hall’s poetry was blended into a single, extended piece specifically structured for the sake of his performance at this event, with these two particular writers, and was one of the finest readings, and perhaps one of the finest works, of his career to date. How does Hall manage to keep surprising after all of these years? See Amanda Earl's report here on both The Factory Reading Series and The Summit.
A new chapbook, a collaboration between Hall and Western Australia poet Andrew Burke, will be available in a matter of days.
Posted by rob mclennan at 11:35 AM