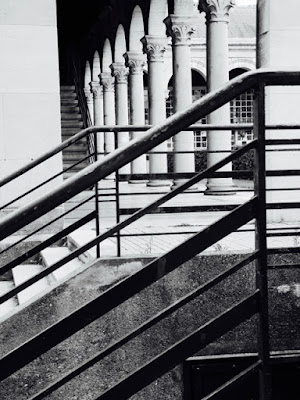 
I HAD NOTICED AN UNADORNED HOUSE

These poems originally appeared in French in the collection Sunny girls, published by Flammarion in 2015.

Sandra Moussempès, born in Paris in 1965, is a poet. Former resident of the Villa Médicis of the Academy of France in Rome, she has contributed to various reviews and anthologies in France and abroad. She is the author of nine volumes of poetry: Exercices d’incendie, éditions Fourbis, 1994, Vestiges de fillette, éditions Flammarion, 1997, Captures, éditions Flammarion, 2004, Photogénie des ombres peintes, éditions Flammarion, 2009, Acrobaties dessinées & CD Beauty Sitcom (Audio-poèmes), éditions de l’Attente, 2012 and Sunny girls, éditions Flammarion, 2015. She likes to decipher the mental codes that surround us through disrupting conventional imagery, in particular, clichés about the feminine, through the creation of a troubling environment, which has often cinematographic qualities or is inspired by sensations of déjà vu. She has translated American poet Kristin Prevallet into French, and has been translated by Kristin Prevallet, Serge Gavronsky, Lee-Ann Brown, and Carolyn Ducker. Moussempès works as a creative writing teacher. She is also a vocal and sound artist and has performed at Mamco in Geneva, Fondation Louis Vuitton in Paris, Carré d’Art in Nîmes, and other poetry festivals.

Eléna Rivera is a poet and translator. She won the 2010 Robert Fagles prize for her translation of Bernard Noël’s The Rest of the Voyage (Graywolf Press, 2011) and is a recipient of a 2010 National Endowment for the Arts Literature Fellowship in Translation. She has also translated three books by Isabelle Baladine Howald, Parting Movement, Constantly Prevented (Oystercatcher Press, 2014), Secret of Breath (Burning Deck, 2009) and The Pain of Returning (Mindmade Books 2012). Eléna's most recent books of poetry are Scaffolding (Princeton Series of Contemporary Poets, 2017), Atmosphered (Oystercatcher Press, 2014), On the Nature of Position and Tone (Fields Press, 2012) and The Perforated Map (Shearsman Books, 2011).