new from above/ground press: Stephen Collis, FIRST SKETCH OF A POEM I WILL NOT HAVE WRITTEN 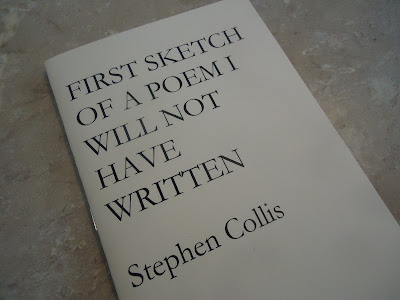 At borders, frontiers, reaching
into the historical moment of listening
to insurrection and speech /
spur and limit
in place of the street / we have Facebook
Google is a universe we
No longer have to search the limits of
the revolutionary subject lies elsewhere
can we revive?
Make a small table set
in verse
a vocal reaching out to,
(and much else
allowed to sinew strength in solidarity as
in digital life we are dead as bodies already
and almost unthinkable technological waste accrues
the pop songs tell us
nothing but the nothing
we have always needed to know
so why not
nuestra arma / nuestra palabra
and what is poetry if money is information?
Cold last night, brain in its envelope, sealed
the struggle for the end of roles rolling on
(the black cap chickadees taking it up at dawn
and sometimes David when I say politics
I mean poetics
swing low
Campanera. Missing. Cellphone. Rift. Blank. Space. Rosebud.
What body is general? Autonomous?
Grass. Roots. Bit. Torrent. Detainees. No one. Illegal.
identity and difference / singular plural
to be small leavings, trace, humble solidarity with all struggles
writing as problem solving /
in the age of insoluble problems

Stephen Collis’s many books of poetry include The Commons (Talon Books 2008; 2014), On the Material (Talon Books 2010—awarded the BC Book Prize for Poetry), DECOMP (with Jordan Scott—Coach House 2013), and Once in Blockadia (Talon Books 2016). He has also written two books of literary criticism, a book of essays on the Occupy Movement, and a novel. In 2014 he was sued for $5.6 million by US energy giant Kinder Morgan, whose lawyers read his writing in court as “evidence.” He lives near Vancouver, on unceded Coast Salish Territory, and teaches poetry and poetics at Simon Fraser University.

This is Collis’s second title with above/ground press, after NEW LIFE (2016).