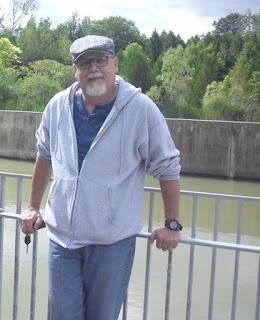 Sad news just now from Gil McElroy, that poet Ian McCulloch has died, very suddenly. He was not only a poet I admired, but we had been talking for over a year about producing chapbooks, and even recently finalized the manuscripts for what would be two titles through above/ground press, the first mere days away from heading to the printer (his last email to me was on Friday, when he sent an updated author biography, and saying he'd be out of reach for the week, given they were going camping).

Gil sent along this short obituary:


We are heartbroken to announce that IAN PHILIP MCCULLOCH, husband, father, brother, son and dear friend to many, has Passed into Mystery, suddenly, at age sixty-two, while camping in Algonquin Park. Ian was a quiet but vital presence in the North Bay cultural community, being a founding member of the “Conspiracy of 3,” now in its thirty-first  year. He was the author of three books of poetry—The Moon of Hunger (1982), The Efficiency of Killers (1988) and Parables and Rain (1993)—and one novel, Childforever (1996). He was also the proud parents of Matthew (Skyler), Elena and Bobbie-Ann. Ian loved nature, canoeing, camping, hiking, reading, writing, music and the sport of Ringette. As well as his children, he leaves behind his “True Companion,” Laurie Kruk-McCulloch, writer and professor. A Celebration of Ian’s Life is planned for Sunday September 29th, 1-4 at Club 183 (183 First Avenue West, North Bay). Memories, stories and poems are encouraged. Donations to the Heart and Stroke Fund, or World Wildlife Fund, Canada, are welcomed by the family. “Keep Me in Your Heart for a While”—Warren Zevon