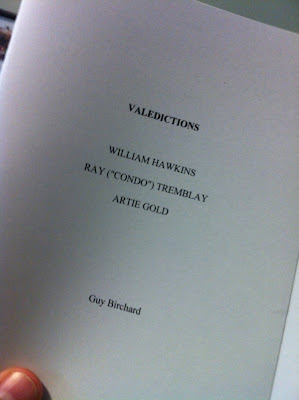 Hawkins was the capital's chief charismatic in the early 1960s, that's a fact. Even before I knew he was a poet, even before I would've much cared, aged fourteen or so, ogling fetish objects, guitars I could no more afford than play, down the Treble Clef basement on Bank Street worked Hawkins, drawing attention away from the Gibsons and Guilds and Martins somehow upon himself.

Then when I was sixteen and fin-de-siècle Ernest Dowson finally turned me on to verse, there was Hawkins, the first and sole livin'-breathin' parish poet already on my radar.

I've bought and sold a hundred thousand books in my time but I keep The Poems of Ernest Dowson (London: John Lane, the Bodley Head, 1919; eighth edition) with Aubrey Beardsley's gilt decorative green buckram boards, filched (for shame) from the Ottawa Public Library, and Hawkins' first six titles. I had Hawkins, Poems 1963-1965 (Ottawa: Nil Press, 1966) memorized without trying, I read it so many times in high school. Got it, of course, at Shirley Leishman Books on Gilmour Street. Saw Two Longer Poems: The Seasons of Miss Nicky by Harry Howith & Louis Riel by William Hawkins (Toronto: Patrician Press, 1965) on C.C.J. Bond's bookshelf out at his house and that impressed me enough that I went and got a copy and hand-lettered the unprinted spine in red ink just the way C.C.J. had his. Quickly scored Shoot Low Sheriff, They're Riding Shetland Ponies! Poems 1959-1964 (no place: no press, 1964) and Ottawa Poems (Kitchener: Weed/flower Press, 1966). How fascinated I was that year by the televised, crude, mock-Gjon Mili proto-rock-video of the "Young Man of the Year" moodily reading Ottawa Poems from CJOH studios. (In about 1970, the first press I ever submitted a callow book-length manuscript to was Weed/flower—because it had published Ottawa Poems.) Much later, I tried to sell a duplicate copy to a pre-eminent Ottawa second-hand book dealer. Hawkins' stock was so low circa 1990 that that dealer wasn't interested, at any price. Couldn't give it to him... Wouldn't be that way anon. John Oughton (go on, say the brother's name) gifted me with a review copy of The Gift of Space, Selected Poems 1960-1970 (Toronto: new press, 1971) that he wasn't going to tend to, in which is to be read disturbingly, concentrated for a cold eye to assess, the self-sabotage that cancels artistic progress. (I myself saw the inside of the Donwood Institute, hired as part of a control group testing varying dosages of antihistamine in the treatment of barbiturate freaks and alcoholics. Where sagged Hawkins in therapy in the commissary.) And lastly, I was given one of the twenty-eight signed copies of The Madman's War (Ottawa: S.A.W. Publications, 1974) by its esteemed printer, Cam Christie. All shall remain safe in my possession as long as I live.

Guy Birchard: I am by birth a deracinated Canadian: Don't panic, stalwart sons—no fault of mother's, no foul of father's—don't jump to conclusions, gentle maidens. The issue is unremitting agon and zero-sum. Reason not the conundrum.