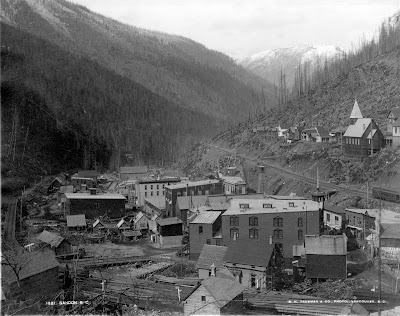 
Just south of the Canadian border, what’s left
of Bolster’s ninety log houses, the few hopes
no wolf gusted down.
Little to live on, but much to live for.

One year later, there goes the mine.

No one goes.
It was never much. Nothing
to do with me.

Prehistoric Gardens
newly restored all the dinosaurs
already 14 years old when I was born
still there in the streambeds in the ferns
the Pteranadon with its 27 foot wingspan
as dead as ever the skunk cabbage
as stinking yellow the gift shop
stocked with by-the-scoop
stones gleaming like that Ichthyosaur’s
eye by the gleaming stream
by the Oregon coast.

Farther south Paul Bunyan and Babe
outside the restaurant
we used to visit did we ever
go beyond the shop
what was there there? Trees
of Mystery, California’s premier
nature attraction on the North coast.

That filtered light on paths and trunks.

The site shows rooms of First Peoples’
arts and artefacts I don’t remember seeing.
Called End of the Trail Museum.

Stephanie Bolster has published four books of poetry, the first of which, White Stone: The Alice Poems, won the Governor General's and the Gerald Lampert Awards in 1998. Her latest book, A Page from the Wonders of Life on Earth (Brick Books, 2011) was a finalist for the Pat Lowther Award. Work from her current manuscript-in-progress, Long Exposure, from which this chapbook is also drawn, was a finalist for the Canada Writes/CBC Poetry Prize in 2012. Editor of The Best Canadian Poetry in English 2008 and co-editor of Penned: Zoo Poems, she was born in Vancouver and teaches creative writing at Concordia University in Montréal.