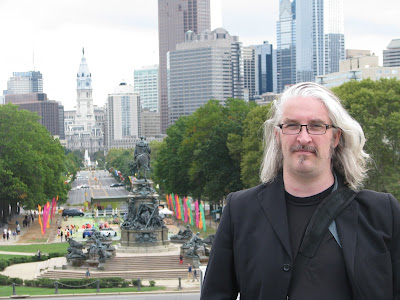 above/ground press publisher, editor and author rob mclennan has been announced as one of this year's two 2016 VERSe Ottawa Hall of Honour inductees! He will be reading this coming Sunday at VERSeFest as part of the event.

His most recent above/ground press chapbook is The Rose Concordance (2015). He will be releasing a limited-edition poetry chapbook, King Kong, for Sunday's ceremony and reading.

As the press release reads:


Ottawa, ON – Mar. 18, 2016 – VERSeFest, Ottawa’s International Poetry Festival, is pleased to announce this year’s inductees to the Hall of Honour, rob mclennan and Andrée Lacelle, for outstanding service to the Ottawa-Gatineau poetry community.

mclennan and Lacelle will be inducted into the Hall of Honour 7:00 P.M., Sunday, March 20th. The ceremony will also include readings by Parliamentary Poet Laureate George Elliott Clarke and Governor General Award winner Robyn Sarah.

For three decades, rob mclennan has been at the forefront of promoting poetry in the city of Ottawa. His literary productivity has been outstanding, with over two dozen trade books of poetry, fiction, and non-fiction. He has demonstrated tireless community leadership in his activities as the founder of the Ottawa small press book fair, the organizer of the factory reading series, and the editor and founder of Chaudiere Books, ottawater, The Peter F. Yacht Club, and above/ground press. All of these activities, alongside the generosity of his mentorship and his editorial flair, have helped to shape the creative ethos of this city.

Born in Hawkesbury, Andrée Lacelle has published a dozen books and received numerous literary accolades. She was the first to receive the French-language Trillium Book Award for Tant de vie s’égare (Éditions du Vermillon, 1994 [2007]) and she has also been shortlisted for the Governor General Award. Instrumental to the promotion of French-language literature, she has been a long-time contributor of book reviews. She has also reviewed Franco-Ontarian literature on the show “Panorama” (TFO, 2006-2010) and on her radio program “Au cœur des mots” (2011-2014). Her literary collaborations recently included co-writing and co-editing pas d’ici, pas d’ailleurs, Anthologie poétique de voix féminines contemporaines (Montélimar, Voix d’encre, 2012). Her poems have been translated into English and Czech.

The VERSeFest Hall of Honour recognizes established poets from the greater Ottawa-Gatineau region who have produced a substantial body of work and have made a significant contribution in building the poetry community as a leader and mentor.

VENUE AND TICKETS
Knox Presbyterian Church, 120 Lisgar St. Tickets are $10 per event, $20 for a weekend day pass, or $50 for a festival pass. Available online or at the door. For more information, visit versefest.ca