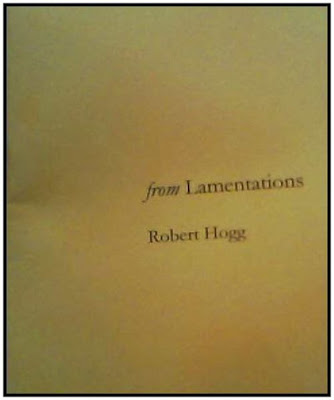 
from Lamentations, a cinematique look at childhood and death in a Western Canadian town, a “memoir” in poetry that remembers balloons and soft edges, the romance of cowboys, inside difficult times. Robert Hogg was born in Edmonton, Alberta. He has been on the Canadian literary scene since the 1960’s, studying at the University of British Columbia he was involved with the Black Mountain poets and the Tish poetry movement. He has earned a Phd in literature and taught N.A. poetry and poetics at Carleton University in Ottawa until 2005. Poet Hogg has written 6 books.

from Lamentations, begins with a poetic prose introduction that freefalls into childhood memories of trolley rides and watching Roy Rogers at the cinema, playing “cowboys and Indians” shooting at each other with toy guns, playing dead. And how the Poet laments, as if it was all just fun and games, romance, as if no one ever really died, the fight of good vs. evil, the shooting of horses wasn’t real. A series of poems follow, pared in free verse, experiential, a brush with Imagism, Sitting on Ginger, Ahead (in memoriam, Bob Creeley), The Creative, A Fallen Wall to climax into a mix of poetic prose and free verse in Summer of Sixty three – for Jamie and Carol – on Jamie’s 70th and to end with Synapse Mid-Morning January, as if in epilogue. The short staccato lines in broken thought train are barren and lightening, the nature imagery and Zen of New Age poetry.

Is this a little like the end of the world?

Is this a small blip on the screen called life?

Listen to the small pounding of the rain.

It make of your forehead

beyond which there is no longer

a boundary to cross

only a damp ground

aching to be closed.

The Poet quotes “Porgy and Bess”, Nina Simone and a Black spiritual, the poetry like a reconciliation for the dead and dying, an apologia for the violence of the Western world. This poetry is written at the apex of the life of the Poet, and is reminiscent of Sailing to Byzantium by W.B. Yeats:

“That is no country for old men. The young

In one another's arms, birds in the trees,

—Those dying generations—at their song,

The Poet is older, looking through the specter of the Spirit world that like a veil has begun to descend and enfold, a cinematic in grey sepia casting into nether worlds.

A fantastical read inside the Canadian landscape, a song of the Canadian West, an idea of celebration after a long journey. from Lamentations from Robert Hogg and above/ground press.