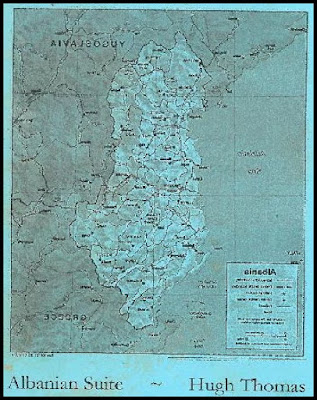 Rebecca Anne Banks was good enough to review Hugh Thomas' Albanian Suite (2014) over at Subterranean Blue Poetry. Thanks, Rebecca! See the original review here. This is actually the fourth review of Albanian Suite, after Amanda Earl's review, one by Edric Mesmer, and another by Ryan Pratt over at the ottawa poetry newsletter.


This brilliant Chapbook, Albanian Suite is the gift of Hugh Thomas. Poet Thomas lives and works in Fredericton, New Brunswick as a mathematics professor at the University of New Brunswick. He has published Franzlations, “a collection of illustrated Kafka remixes”, chapbooks and been published in various journals 1cent #404, Numero Cinq, BafterC, dig, the Dusie poetry blog amongst others.

In the Acknowledgments, he presents his work as having spun off the poems of Albanian poet Visar Zhiti amongst others, not as a strict translation, because he does not understand Albanian, but this Writer suspects in the true spirit of Albanian.

In the background, down some cobblestone street on a rainy day, Paul Simon sings, “April, Come she will” “When streams are ripe and swelled with rain;/ May, she will stay,/ Resting in my arms again.”

This Writer appreciates and revels in the thick, rich images, as if paintings of a certain noblesse oblige, the lost and present circumstance of decay of the old world Europe, in the new. The metaphors in poetry drip with love and remorse and the passage of time, as if the stone remains despite the rain. From Music I heard with you, “The choir in the clouds hums a Bach cantata/ but someone in the world is coughing/ and Bach is galloping on horseback/ gazing into his crystal of disinterest./ The fierce demons pursuing him/ now just seem wistful.”

As if the last line of defense, the poetry can be heavily laconic as in The Strange Mine of Pork Poetry – “Not enough, those phased lectures of miasma given by a mime – I plugged myelf into the electrical circuit, getting an immediate shock./ The stratagem that sold me the ruins offered drums and furniture, contact with poets leery of bestsellers, literary arms, or –sob!-restaurant meals./ We made examinations down the strange mine of pork poetry, grew wings, became curious about the flowering shrubs among the ruins of ten maps and the vaults of fish.” Also in Sappho II – “cadence address catch dreams/ pays and agree, chlorate of poems,/ empathic, the old epidemic/ things themselves”.

Tucked into the body of the work are two beautiful New Age "translations":

out come the stars

(translated from the Italian of Giuseppe Ungaretti)

I stand on the steps and listen,

stars are swarming in the garden

and I stand in the dark.

Listen, a star just fell with a clang!

Don’t walk on the grass in bare feet;

my garden is full of shards."

(translated from the Swedish of Edith Sodergran)

As if one long lament on love lost, the corruption of love in post-modern times, the passage of time, the grey and violence of post-modern times, the hard technocracy, the unsatisfactory nature of postmodern poetry, perhaps how everything has grown old. As if the world has existed inside some long ago war for too long.

We wait for each other. We cross the pool,

-you said griffin, I said narwhal-

stopped us with an extended claw,

said something in Flemish about life and gardens.

The windows were illuminated even if we weren’t,

and there was dancing among the chimneys.

Overhead, let down on a string out of heaven,

a glockenspiel, as such a total disappointment!"

A celebration of the New Age in poetry, thick with European sensibility and the love diaspora N.A. A fantastical read of Old World Europe, Albanian Suite by Hugh Thomas.