above/ground press at twenty-five: by the numbers, 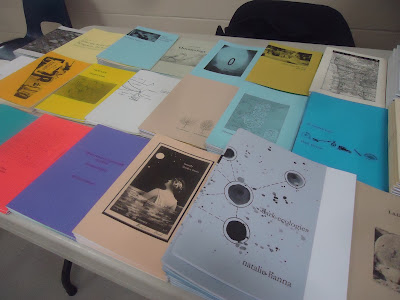 As many of you know, 2018 marks TWENTY-FIVE YEARS of above/ground press production. While the official anniversary doesn’t actually occur until July (including the annual launch/reading/party, with launches of at least a couple new titles), I’ve been going through some of the numbers, realizing that the press is well over a combined eight hundred and fifty publications to date (including Touch the Donkey, but not including the two dozen or so forthcoming titles).

That is an ENORMOUS amount of publications. I daresay: there might be one or two chapbook presses that get close to the volume, or the quality, or the longevity, but rarely all three.

With a couple of items produced under different press names (or none at all) over 1992 and into 1993, the above/ground press officially emerged as the press name in July 1993, with the publication of a poetry anthology and a chapbook of my own, soon followed by a chapbook by Ottawa poet David Collins. With a focus on poetry chapbooks and distribution, the press has also produced numerous journals (five issues of Missing Jacket [see a bibliography here], forty-five issues of the long poem magazine STANZAS [see a bibliography here], sixteen of the twenty-five issues (so far) of The Peter F. Yacht Club, six issues of drop and sixteen issues (so far) of Touch the Donkey [see the list of issues + interviews online here]), as well as numerous anthologies, three hundred and forty-two “poem” broadsides [see a bibliography up to #287 here; link to the most recent publications here], occasional pamphlets, and even a single comic book by Greg Kerr in 1996. There have been publications produced for book fairs in Toronto, Buffalo, Ottawa, Vancouver, New Orleans and Philadelphia, for conferences and AWPs across North America, literary festivals, readings and a variety of tours.

Some items appear quickly, within a day or two of acceptance, and others have been scheduled months in advance. I have folded and stapled every damned one (with the rare exception, of course) myself, usually sitting in front of the television with long-arm stapler (I’m on my third) and worn-down fingerprints. I’ve produced items in runs as low as fifty copies, and as much as twelve hundred. STANZAS held pretty consistently at a print run (distributed gratis) of a thousand, the same number of covers I currently produce for each issue of Touch the Donkey (making more copies of the insides as required). Chapbooks these days are most often in runs of either two hundred and fifty or three hundred (especially given I’ve nearly one hundred subscribers). We only have so much space, after all. 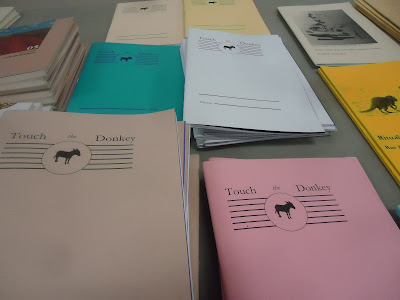 While numerous projects extend and have extended from above/ground press over the years (from the “Tuesday poem” series over at the dusie blog to Chaudiere Books to the “On Writing” series at the ottawa poetry newsletter and the “Spotlight” series via Medium, ottawater and seventeen seconds: a journal of poetry and poetics, the more recent my (small press) writing day, and even the ottawa small press book fair and The Factory Reading Series), the press itself remains strong, existing as the ongoing foundation for basically everything.

I suppose I should mention now that there are plans afoot for an anniversary project or two, including one that has already begun work (but won’t be announced or launched until August/September, most likely). Either way, you can certainly still subscribe for 2018. I mean, why haven’t you?

Thanks to all of them, and to all of you for your attentions! There is so much more still to be done (and so many more authors I would love to be able to produce chapbooks by)…