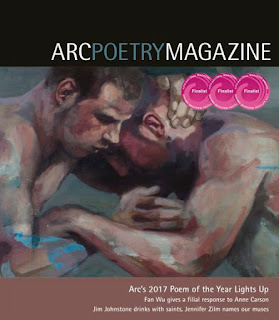 Calgary poet and critic Nikki Sheppy was good enough to post the first review of Julia Polyck-O'Neill's Femme (2016) in the new issue of Arc Poetry Magazine. Thanks so much! You have to pick up a copy of the issue to see the full review, but a fragment of it reads:


In this collection, the room is a feminist forum inhabited by poet Sylvia Plath, conceptual artist Gillian Wearing, literary theorist Hélène Cixous, and postcolonial queer theorist Sara Ahmed, among others. These lines of influence are named and engaged: Polyck O’Neill invokes several titles that absorb her attention: Plath’s “Elm,” Cixous’ Stigmata, and Ahmed’s “Affective Economies.” The effect is to expand the subject, the body and its language to surrounding feminist genealogies, engendering an inquisitive dialogue that is genuinely rhizomatic. In the matter of communication, “Hers is a field model.”