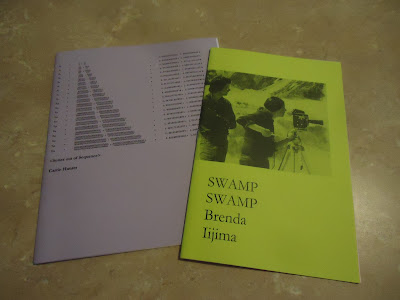 Seattle WA poet and reviewer Greg Bem was good enough to provide the first reviews of Brenda Iijima's SWAMP / SWAMP (2017) and Carrie Hunter's Series out of Sequence (2017) over at Yellow Rabbits. Thanks so much! You can see the original review here. It reads:

“Advancing negligible inches, the reeds are porous barriers, beige poles sharp tall, we are not soldiers, this is not a battlefield at present, but was it?” In Brenda Iijima’s SWAMP SWAMP, a response to the 1971 film SWAMP by Robert Smithson, concepts of terraforming and terra-informing lead to better knowing the form of humans. Feminist, postcolonial, journalistic, what starts at the beginning of the swamp leads through it, the element of the surprise, the unexpected, and the unpredictable binding us to new relationships with knowledge, besieged by and through white settler imperialists, entire systems of militaries, and the shadows of society that rear their head through and through by a revisiting of recent and subconscious representations. Released in 2017.

“If you cannot be honest with yourself, how can you get the truth out of anyone else?” Life’s ride’s most enjoyable moments are enjoying the moments of life. Livelihood and the inclusion of experience is a theme erupting from the strands of language threaded together in Carrie Hunter’s Series out of Sequence, which collages together lines from at least a handful of contemporary and nearly-contemporary films and television shows, from Minority Report to Daredevil. The result is a book of poetry that feels as alive as the maximalist culture we live within, an ecology of its own. Here, in this anti-sequence, there is the sense of the ecological, but also the sense of the chaotic, as contexts morph and blend and merge into one another. And yet via Hunter as the peripheral artist of the craft, the language feels universal and total, allowing an experience wholly unique and of itself, but beyond itself, magnetically envisioning the limits (and limitlessness the same) of our world. Released in 2017.