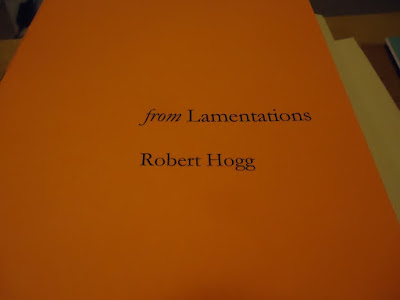 Ryan Pratt was good enough to review Robert Hogg's from Lamentations (2016) over at the ottawa poetry newsletter. Thanks much! This is actually the third review of Hogg's chapbook, after Rebecca Anne Banks reviewed such over at Subterranean Blue Poetry, and Scott Bryson reviewed such in Broken Pencil. You can see Pratt's review here. As he writes:


As its title suggests, from Lamentations is a sampler of poems from an as-yet-unreleased body of work about memory. That this is the compilation’s expanded, second edition implies considerable gestation time. But even without knowing that, the sporadic growth of this manuscript can be measured by dates that accompany each poem, marking when their finished drafts occurred. As a result, Robert Hogg explores the past in layers, writing about his childhood and formative years in the 1950s and 1960s via perspectives he held on dates ranging from the early '90s up until January of this year.

Hogg pokes and prods these breadcrumbs of autobiography for gleanings beyond his own experience. “Roy Rogers – a jazz elegy” and “Summer of sixty-three” deal in fractured, stream-of-conscious details that transpose the youthful significance of its subjects to disquieting uncertainty. He slows his boyhood’s galloping adoration for Hollywood cowboy Roy Rogers to examine the simple “good against evil” doctrine of America’s wild west:

the colorful black and white dazzle of your perfect horsemanship riding
full speed the reins wrapped around the horn those mother of pearl six guns
twirling round your index fingers and firing so perfectly the outlaws seemed
to fall and die but not really it was just like the make-believe we also played
Jesus Roy did you know all that when you practiced your squint in the mirror and
yodelled all those songs on the radio nights we were too young to know any better and
thought it was real romance?


Later, in "Summer of sixty-three", he steadies a romanticized image of his “bohemian goodfornothing but love and lovemaking friends” upon the dulling of years passed:


Tight, conservative stanzas like the above excerpt follow wooly, run-on yarns – sometimes within the same poem – as though the writer is torn between rose-tinted nostalgia and the dislocation of trying to categorize certain memories, decades on. Yet these poems aren’t so much conflicted by age as they are counterbalanced, the wild and restrained Robert Hogg appearing on page in roughly equal measure. The tone’s just right – good natured but deeply felt.

With “Ahead (in memoriam, Bob Creeley” and “Synapse, Mid-Morning, January”, the chapbook takes on true existential colours; the former poem aiding a good friend in traveling the mysteries of afterlife and the latter finding Hogg at present day, kindling a wood stove. There’s no sentiment in this last poem, just small observations on the present moment. And given so much space to interpret, I wonder if "Synapse, Mid-Morning, January" provides such a contrast from the bulk of from Lamentations because it signals the sort of insight one's left with after seventy-odd years on Earth. There's no ego; just a new memory, cut at the root.