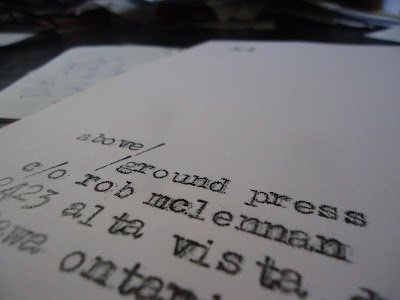 above/ground press presents readings and other such by an array of poets:

$5 at the door; includes a copy of a recent above/ground press title

Braydon Beaulieu is a doctoral candidate at the University of Calgary where he studies creative writing, poetics, science fiction, and games. He lives in Toronto.

He is the author of the above/ground press chapbook ERASURE: A Short Story (2016).

Ashley-Elizabeth Best is from Cobourg and now lives and writes in Kingston. Her work has appeared in CV2, Berfrois, Grist, dusie, Ambit Magazine and The Literary Review of Canada. Her debut poetry collection Slow States of Collapse was shortlisted for the 2015 Robert Kroetsch Award for Innovative Poetry and was published with ECW Press in April of 2016.

She is the author of the above/ground press chapbook Now You Have Many Legs To Stand On (2015).

His first chapbook, produced by above/ground press, is the vitamins of an alphabet (2016).

Stephen Brockwell is an Ottawa poet and small business schlub. His poems are forthoming in Arc and Inwords. He is preparing workshops on poetry and philosophy for the Ottawa Public Library. His chapbook Where Did You See It Last? appeared in June with Ottawa's Textualis Press, and he has a new poetry title out this fall—All of Us Reticent, Here, Together—with Mansfield Press.

He is the author of four chapbooks from above/ground press: Images from Declassified Nuclear Test Films (2014), Excerpts from Impossible Books: The Crawdad Cantos (2012), Impossible Books (the Carleton Installment) (2010) and Marin County Poems (2001). He had work reprinted in the anniversary anthology Ground Rules: the best of the second decade of above/ground press 2003-2013 (Chaudiere Books, 2013).

Sharon Harris is a Toronto artist/writer whose poems have been anthologized in The Broadview Introduction to Literature, The Last Vispo, and Shift & Switch: New Canadian Poetry. She is the author of chapbooks from bookthug, In Case of Emergency Press, and above/ground, and her first full-length collection, Avatar, was published by The Mercury Press. She has written articles for Geist, The Globe & Mail, and Open Book Toronto;  is a past contributor to Torontoist and Word Magazine; and her work has been published in The National Post, dANDelion, The Capilano Review, Drunken Boat, The Volta, broken pencil, and Vallum. I Love You Toronto, her exhibition of photographs, appeared in newspapers, magazines, and on radio and television across Canada.

She is the author of the above/ground press chapbook LIKE (2014) and “More Fun With ‘Pataphysics” STANZAS #43 (2006). She had work reprinted in the anniversary anthology Ground Rules: the best of the second decade of above/ground press 2003-2013 (Chaudiere Books, 2013).

Aaron Tucker’s first full collection of poetry, punchlines, was published by Mansfield Press in Spring 2015. Additionally, he is one of the co-creators of the ChessBard (chesspoetry.com), an app that that translates chess games into poems. His collection of essays Interfacing with the Internet in Popular Cinema was published by Palgrave-Macmillan in July of 2014. By day, he is a professor in the English department at Ryerson University where he is currently teaching essay writing and digital literacy to first year students; by night, he is working on learning chess in between watching his beloved Raptors lose games. You can reach him atucker[at]ryerson[dot]ca.

He is the author of the above/ground press chapbooks punchlines (2013) and apartments, section three (2010). He had work reprinted in the anniversary anthology Ground Rules: the best of the second decade of above/ground press 2003-2013 (Chaudiere Books, 2013).