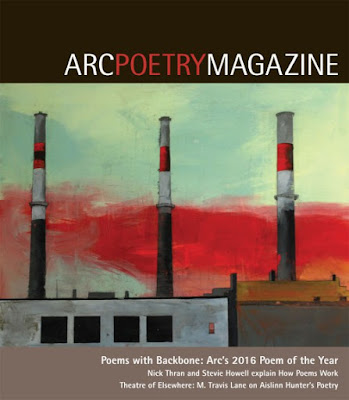 Toronto poet Bardia Sinaee was good enough to review Ashley-Ezliabeth Best's Now You Have Many Legs to Stand On (2015) as part of a group chapbook review in the summer 2016 issue of Arc Poetry Magazine. Thanks so much! This is actually the second review of Best's chap, after Robert Anderson's review at Fjords Review. And of course, Best's wee chapbook is still very much available!

The review reads, in part:


Amid these various postures and gestures, Ottawa’s twenty-three-year-old above/ground press is refreshingly agnostic. The chapbooks’ design and typesetting are decidedly plain (think clipart and Word formatting), the binding consists of a single staple through the spine, and this material banality effectively foregrounds the unique characteristics of the writing. The poems in Now You Have Many Legs to Stand On, a recent above/ground release by Kingston-based poet Ashley-Elizabeth Best, stand out for their unsentimental takes on sex, emotional codependency, addiction and the body. Though her speakers don’t eschew affectation or misdirection, Best doesn’t use irony as a crutch. She can be arrestingly frank, as when she says, “I’m so tired of my whole life revolving / around my body,” but also reserved, wise and weary like in the Solie-esque travel poem “Stones and Their Stories”:

The long sweep of faces, eyes
grazing the dark of the bus.
Fashioning myself without sleep,
eyeing dynamite striations
in roadside rock, one feeling
nesting in another.

Unifying the various registers in which these poems speak are a few consistent (at times overly pervasive) motifs. Just about every poem describes the human body using aspects of the landscape or vice versa, so we get “the whitened roadways of scars,” “the bus full / of bodies felled in awkward rest,” “the charred chest of a tree,” “the fjord of my thighs” and “the harbour of my belly.” Whereas in “Stones and Their Stories,” the projection of one’s mindscape onto dynamite striations, or admissions like “I like to know things by placing / them in my mouth, sappy pine / bark, balled paper,” are understated and sensually interesting, the body-landscape motif is elsewhere more of a distraction. The chapbook’s title poem is riddled with too many of-constructions: “the slushy rhythm of the lake” is heard “in the shambling belly of conflicted currents,” a.k.a. “the brawling / waters of the lake,” out of which one pulls oneself onto “a muscled first of precambrian shield” which is also “the lake’s throat”; then there’s “the blood of light” and “grief chewing into the cartilage of the seasons.” The compounding and at times conflicting metaphors ultimately tax the reader so much that the poem’s expressions of fear, want and grief come off as superficial or, at the very least, unexplored.