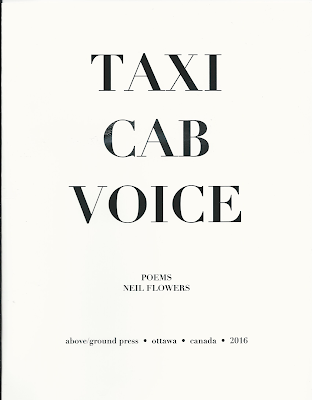 (Trumpet solo, then
the singer vamps
scatting the intro, then

Not to mention
everyone else

Neil Flowers, aka Neil Whiteman, aka Monk Besserer, and likely several other aliases that he’s long forgotten, was born in Montreal and has lived in Italy, Mexico, the U.S., and on Saltspring Island, BC. In the late 60s and early 70s, he studied literature at Carleton University, including being a member of Robert Hogg’s seminar in modern and contemporary poetry. As well as being a poet, Neil has worked as an actor, director, and writer for radio, theatre, and film. He currently lives in Los Angeles where he works as a screenwriter and script doctor, and teaches screenwriting. A distant ancestor, Robert Flowers, a British soldier stationed at Lake Champlain who fled America for Canada when the Yanks more or less won their revolution, helped found the town of New Carlisle in the Gaspé.

Neil transcribed and edited the public poetry reading that effectively became the anthology Northern Comfort (Ottawa, ON: Commoners’ Press, 1973). See a recent interview with him, conducted by rob mclennan on the project, here.

Taxicab Voice was written over a period of several years in several places but chiefly in Ottawa, Albuquerque, and Los Angeles.