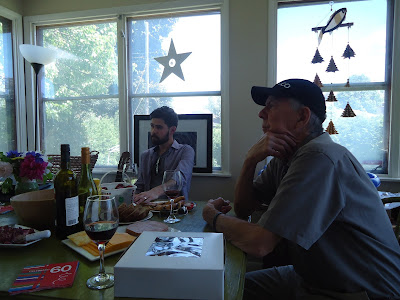 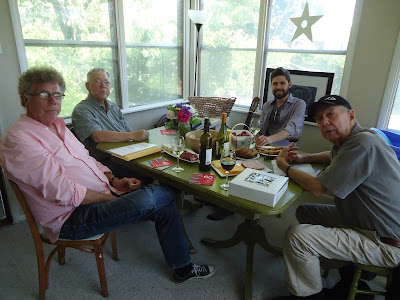 Neil (also known as Neil Whiteman, brother of Bruce) was coming through town to pick up copies of his new above/ground press chapbook (watch for an announcement for such later this month), and thought it might be an opportunity for old and new friends to enjoy some time together. For those unaware, Neil Flowers had been a student of Robert Hogg's at Carleton University, and transcribed and edited the public poetry reading that effectively became the anthology Northern Comfort (Ottawa, ON: Commoners’ Press, 1973) [see my recent interview with him on the project here] before leaving town for a lengthy career in film in Los Angeles. 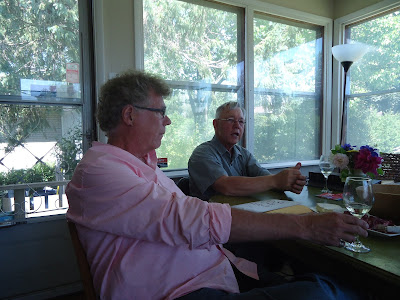 We had many drinks and much conversation. Bruce, whom I haven't actually seen since 1995 (a year after meeting him), has since relocated to Los Angeles and Ohio before finally returning to Toronto. Hogg, on the other hand, I discovered, might be one of the very few that attended both the 1963 Vancouver Poetry Conference as well as the 1965 Berkeley Conference. We spoke of Robert Duncan and Charles Olson, of Ken Norris, Judith Fitzgerald, Raymond Souster and Stan Rogal, and other poetry odds and sundries, and even went through an old photo album that Hogg had thought to bring along (he regaled us with numerous stories throughout). We'd hoped to be able to include William Hawkins as part of the gathering as well, but he wasn't up for a visit this time around.

We, of course, thank Christine McNair's generous patience throughout the day, as she corralled our young ladies. Rose would float through occasionally, seeking strawberries, and Aoife sat with us now and then, barely saying a word.
Posted by rob mclennan at 2:34 PM