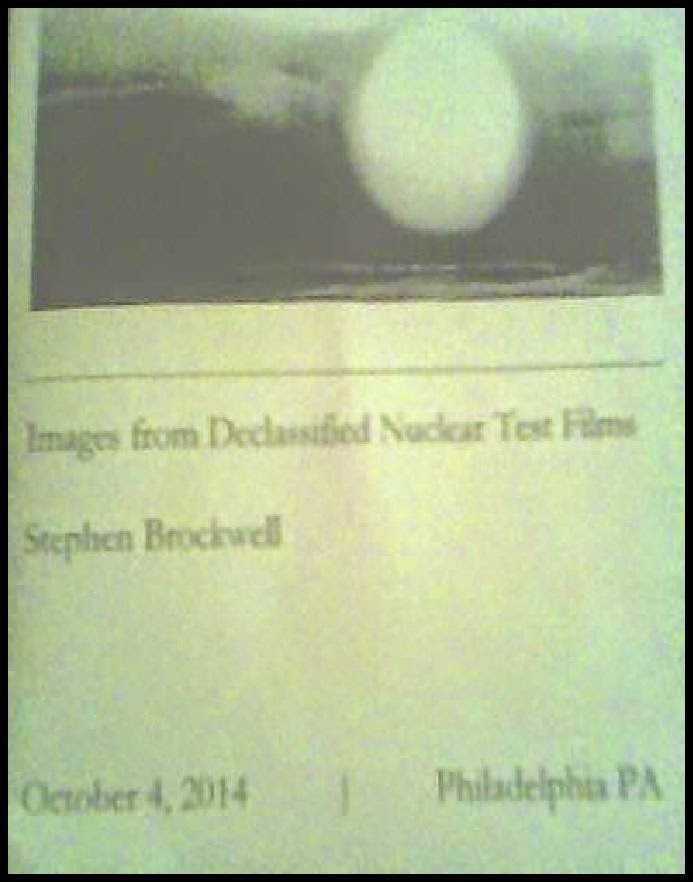 “The sound of silence” by Paul Simon plays quietly in the grey lilt of a winter afternoon. Images from Declassified Nuclear Test Films is a brilliant read by Canadian Poet Stephen Brockwell, born in Montreal and living in Ottawa. He has 4 published Chapbooks with above/ground press and has written 5 books of poetry, including Fruitfly Geographic (2004) which won the Archibald Lampman Award. He runs a small information technology company.

As This Writer goes to pick up the Chapbook to read, the title, “Images from Declassified Nuclear Test Films” I am reminded of the movie “Dr. Strangelove” and all the slapstick paranoia associated with the nuclear weapons age. The series of poems are presented in 3 parts, the first perhaps a series of files from someone’s impressions of old film reels of nuclear tests, the second is titled “Inaudible Dispatches from Radio News” and the third is titled “Wednesday Morning, 3 AM”.

The first poems begin, he is looking at a girl, perhaps a love interest and something is wrong. Then the poems move to an image of a burning tree and perhaps the image of a man before the catastrophe or was it a trick of the light of a photo? Images of desert flowers, the sun, stars and the idea of digging with a heavy water spade. The images unfold in intrigue, mysterious, of the desert, presenting post-apocalypse landscape, someone hovering and observing. As if questioning a presentation of violence that should not be, perhaps a response on a personal level as well as a response to geopolitics and nuclear warfare.

Her hair.
Say that – all the voices
Murmur.

What skin tone
adjustments, I can’t
imagine – who could?
No categories for that
declassification, too much
gamma
to see it.

And of the trees,
what survival?
Match stick does not
survival make
as beautiful as sunsets.

There are no creams
for alpha particles.”

desert flowers,
mountain sunset,
cup and horizon
at the moment
of creation.

of the perishable
mood, desire,
its pitch and yaw,
an orientation

The second presentation of “Inaudible Dispatches from Radio News” is a running presentation of “what if” in the news with counterpoints of dialogue as if a send up of the artefact of culture that is war.

The third presentation of “Wednesday Morning, 3 AM” is a series of sentences, as if playing on the theme of silence after a bomb has been dropped. The idea of silencing, an ending after devastation, the enforcement of a power paradigm, the idea of muzzling, the end of freedom, the idea of death.

“Nothing more silencing than loss of employment in the cathedral ceilings of the boxmall.”

“Nothing more silencing than the derisive laughter of intimate companions you have never met but who have eyes and ears.”

“Nothing more silencing than a hand over a mouth.”

The writing immediately draws you in, the style minimalist, blunt and spare in the first presentation morphing into poetic prose with a staccato delivery. As if borrowing from the Beat Poets and the war misery of the legacy of T.S. Eliot (The Wasteland), the disconnected thought forms build a picture of emotional and perhaps actual violence. As if a reminder of the devastation of nuclear warfare and the out of control cursehold, the stranglehold of love lives and geopolitics in North America. Images from Declassified Nuclear Test Films is a study in truth and violence, a classic rendering that addresses the issues of the post-modern world as it morphs into the New Age.